Update Required To play the media you will need to either update your browser to a recent version or update your Flash plugin.
By Bryan Lynn
19 December, 2018

Musk is best known for founding electric carmaker Tesla and aerospace company SpaceX. But two years ago, he announced on Twitter plans to launch a new company.

His tweet said the business, later formed as the Boring Company, would seek to ease traffic in the city where he lives, Los Angeles.

"Traffic is driving me nuts," Musk wrote. So he promised to build a tunnel-making machine and to "just start digging."

Musk says the Boring Company's aim is to make a series of tunnels in Los Angeles and other cities. The company is developing equipment to dig faster and make the process more cost effective. 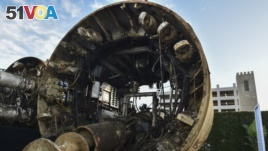 Elevators would lower passengers and vehicles into the tunnels. Musk said vehicles could travel at speeds up to 241 kilometers an hour. He wants to use electric, self-driving vehicles to move people around the city.

On Tuesday, Musk showed off the first experimental passageway, which stretches 1.8 kilometers through a neighborhood near Los Angeles. An entrance to the 3.6-meter-wide tunnel is on land belonging to the Boring Company and SpaceX.

Some reporters and invited guests were permitted to test out the system. They first got inside a specially-equipped Tesla Model S, which drove them from the Boring Company to a "station" at the other end of the tunnel. Currently, the station is nothing more than a wall-less elevator built near some homes. The elevator lowered the Tesla into the tunnel, about nine meters below the surface.

The vehicle then waited for a control light to turn green before beginning its trip. An Associated Press news agency reporter said her trip, from one end of the tunnel to the other, took three minutes. For the test, the car traveled at about 64 kilometers an hour. This was far slower than Musk's target of 241 kilometers an hour.

The reporter described her ride as a bit "bumpy," as the Tesla shook repeatedly during the trip. Musk admitted to some bumpiness. He explained that "we kind of ran out of time" and said there were equipment problems.

The businessman said such problems are common with test models and promised that future systems will run as "smooth as glass." The Tesla test car was equipped with special side wheels that were deployed to help keep the vehicle stable during the ride.

Musk also took his own test drive and received a warm welcome from people waiting at the other end of the tunnel. He told the crowd he considered his first ride "epic." He said he was excited for the first test of the system, which he calls the "loop."

Musk said a completed system of numerous tunnels could hold up to 4,000 vehicles an hour. He has plans to continue expanding the system in Los Angeles and other cities.

In June, Chicago chose the Boring Company to build a 27-kilometer underground system linking the city's downtown to the city's main airport. The company has also proposed an East Coast system to link the city of Washington, D.C. to areas in neighboring Maryland.

However, the Boring Company has already faced opposition. Some groups have expressed concerns about how building and operating such a system would affect local communities.

The "loop" system is separate from another transportation project Musk has worked on called Hyperloop. He has said that system would operate with electromagnetic technology and forced air. It intends to use electric vehicles to carry between 8-16 passengers between major cities at speeds up to 1,000 kilometers an hour.

Bryan Lynn wrote this story for VOA Learning English. His report was based on information from The Boring Company, Associated Press, Reuters and Agence France-Presse. George Grow was the editor.

drive me nuts – phrase. to annoy, bother or frustrate

tunnel – n. long passage that runs underground or through a mountain

elevator – n. machine that carries people up and down, usually inside buildings

guest – n. visitor; someone who has been invited