Update Required To play the media you will need to either update your browser to a recent version or update your Flash plugin.
By VOA
10 January, 2014

A weather system known as a polar vortex brought dangerously cold weather to large parts of the United States this week. A polar vortex is a cold, thick low pressure system. The air turns counter-clockwise when on the move.

The polar vortex started up in Canada. After crossing the border, it moved deep into the southeastern United States. The polar vortex brought the coldest temperatures in more than 20 years to many areas. Anise Jenkins lives in Washington, DC. 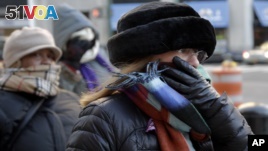 People bundle up against the cold in New York City, Jan. 7, 2014.
"I have a coat on. I have three sweaters. I have two blouses. I have a thermal on and I don't feel like I have anything on."

Another woman, named Amanda, lives nearby in Maryland.

The weather was also a shock to visitors from overseas. Deepak from India was visiting his sister in New York.

"Tears just come out from my eyes and my head inside like a freezer. Oh, my God. Oh, my God."

The extreme weather started with a low-pressure system near the North Pole. The Arctic air was pushed as far south as Alabama on wind currents known as the jet stream. The bitter cold covered much of the central United States, forcing schools, government offices and businesses to close.

Camden Walker is a reporter for the Washington Post. He is part of the newspaper's Capital Weather Gang, which limits its reporting to the weather.

"When the jet stream came south, the floodgates opened from the north and we had a direct flow from the Arctic."

But the polar vortex did not have the same effect everywhere.

"Interestingly enough, it is warmer in Alaska and also somewhat warmer over Greenland because when you deplete the North Pole and the Arctic region of its cold air, when it's forced southward, it can't all stay there. Basically it's a bubble that is draining toward us. It is rushing towards us in the United States."

Camden Walker says the weather system moved away quickly from places like Washington. But the cold air and high winds were staying longer in the middle of the country.

At least 20 deaths were blamed on the cold weather nationwide. Health experts said people should go outside buildings for only 10 to 20 minutes at a time. They warned that being outside in such cold can cause frostbite. This condition may cause exposed parts of the body to freeze.

Temperatures of minus 10 degrees Celsius or lower were reported in Washington, New York, Boston and Philadelphia. In fact, temperatures in all or parts of the 50 states were below freezing at some point on Tuesday. Even in Hawaii, it was minus six degrees at the top of the state's highest mountain.

The effect of the polar vortex was extensive. Airline companies cancelled more than 11,000 flights over a four day period. The cold weather also interfered with train service. In the south, the Tennessee Valley Authority said it set a single day record for electricity as homeowners struggled to stay warm. The TVA provides power to seven states.

And it was not just North America that experienced extreme cold. Over in the Pacific Ocean, a Russian research ship was stuck in ice for over a week. The Shokalskiy left New Zealand on November 28. The ship was carrying 52 passengers when it became stuck. They were rescued January 2, when a helicopter flew them to an Australian icebreaker.