Update Required To play the media you will need to either update your browser to a recent version or update your Flash plugin.
By VOA
14 April, 2014

The United Nations Food and Agriculture Organization says Africa has more food security problems than any other continent. Representatives of more than 50 countries gathered in Tunisia capital Tunis last month for the agency's 28th yearly Conference on Africa.

The meeting ended with a renewed promise of support for food security and continuing development.  The FAO says Africa has had strong economic growth in recent years. But it says the continent continues to suffer from low agricultural productivity, low incomes in rural areas and high rates of malnutrition. 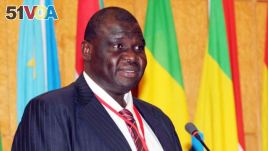 Still, the agency says, the situation has improved in some areas, including increased production of basic crops. It says farmers are growing better kinds of bananas in eastern and central Africa.

And it says they are planting maize that produces more crops in an hectare. Farmers are also growing more cotton, teas and flowers. But the FAO says all of that is not enough for the growing population.

Bukar Tijani is the Assistant Director-General of the agency. He says the agency wants to help increase investment in small farms, many of which are controlled by women. And he says, he wants to help bring young people into farming.

"The theme of the conference itself is really to support youth in different endeavors of agriculture. That is crops, livestock, [fisheries], forest products and the value chain activities related to it, including technologies, communication, ICT – everything that could attract youth into it because it's big monies," said Tijani.

The FAO says, agricultural production in African countries has increased less than one-percent every year, compared to two-percent in other developing countries.

"The future of Africa or any generation lies in the youth. And that is why I'm calling on youth to come into agribusiness so that you can have employment generation, wealth creation, incomes within agriculture across Africa," said Tijani.

To improve food security, 6 countries signed agreements with the FAO. They will receive 2 million dollars each from the Africa Solidarity Trust Fund. The nations are Central African Republic, Ethiopia, Malawi, Mali, Niger and South Sudan.