Update Required To play the media you will need to either update your browser to a recent version or update your Flash plugin.
By John Russell
23 August, 2017


American's support for charter schools has dropped significantly in the past year. But there is less opposition to other kinds of school choice, including vouchers, according to a new survey by Education Next.

Education Next is a journal published by Harvard's Kennedy School and Stanford University. For many years, it has taken a survey of public opinions about education issues.

This year, the report says that only 39 percent of people who took the survey wanted to see more charter schools – a roughly 12 point drop from last year. 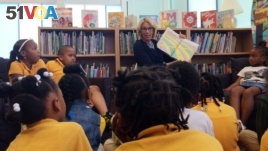 The report also notes that opposition to vouchers has dropped from 44 percent to 37 percent.

School choice allows public education funds to pay for schools or services that fit the needs of students. It refers to the idea of giving parents and students more choices about where to study.

A charter school is a school that receives a special charter, or written rules, from a state government. These schools, a type of school choice, are publicly funded but operate independently from school districts.

President Donald Trump campaigned on a promise to expand school choice. Education Secretary Betsy DeVos has made school choice a top issue for the department. But some charter school supporters have feared that Trump's arguments for school choice could actually hurt the movement.

Martin West is an associate professor of education at Harvard University and one of the authors of the report. "We can't say definitively what is responsible for the decline," he said.

West added that opposition from teachers unions and Democrats may have played a role. In addition, debates over the usefulness of charters may have hurt charters' image. "These developments may have led to a souring of the charter brand," he said.

The results of the survey have not discouraged charter school proponents.

Nina Rees heads the National Alliance for Public Charter Schools. She said that more than 300 public charter schools opened last year. And there are now over 6,900 charter schools serving 3 million students across the country.

Some experts say that Trump has had an effect on the public debates about charter schools.

Lake explained that she had heard from many people that "schools have a lot of conversations with parents that they didn't use to have about why charter schools are public and why they are not a partisan issue."

Rick Hess is a director of education policy at the American Enterprise Institute. He said Trump and DeVos may have turned school choice into a much more divisive issue than it needed to be. He noted they may have been too critical of public schools.

"Sometimes the way these things get talked about, you can wind up alienating people who might be with you," Hess said.

Maria Danilova reported on this for AP News. John Russell adapted it for Learning English. Hai Do was the editor.

voucher – n. a document that gives you the right to get something (such as a product or service) without paying for it

discourage – v. to make (someone) less determined, hopeful, or confident

partisan –adj. strongly supporting one leader, group, or cause over another

alienate – v. to make (someone) unfriendly : to cause (someone) to stop being friendly, helpful, etc., towards you