Update Required To play the media you will need to either update your browser to a recent version or update your Flash plugin.
By Hai Do
06 April 2021


The coronavirus pandemic caused factories to close, forced people out of work and resulted in economic recessions for much of the world. However, the health crisis also created a chance for 40 people to join the list of the world's richest.

Forbes magazine released its yearly list of the world's billionaires on Tuesday. The U.S.-based magazine found that even with the pandemic, 2020 was a "record-setting year for the world's wealthiest."

Forbes found that a record 493 people became billionaires last year, or about "one new billionaire every 17 hours." The list now has 2,755 billionaires. It is the most ever since the magazine started publishing the list 35 years ago.

The magazine found that the billionaires' wealth is worth about $13.1 trillion. That is nearly the size of the 2019 gross domestic product (GDP) of China, the world's second largest economy. And the number is as large as the combined GDPs of Japan, Germany, Britain and South Korea. That information comes from the World Bank. 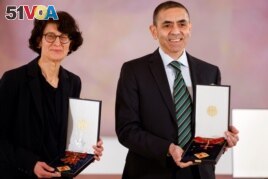 FILE - German scientists, CEOs and founders of BioNTech, Ozlem Tureci and Ugur Sahin pose with the Bundesverdienstkreuz (Federal Cross of Merit) awarded to them by German President Frank-Walter Steinmeier.

Among the new billionaires on the Forbes list are 40 people who made their money from companies involved in fighting COVID-19. Some are connected to the vaccines that they helped develop in record time. They included Ugur Sahin who helped create the Pfizer-BioNTech vaccine and Stephane Bancel of Moderna.

Some vaccine companies have been so successful that they produced several billionaires last year. Both American company Moderna and China's CanSino Biologics now have four billionaires each. CanSino developed a one-shot COVID vaccine that was approved by Chinese health regulators in February.

Others got rich, Forbes said, by making personal protective equipment, tests, antibody treatments and software to deal with COVID-19. All of them are needed to reopen the world's economies and return to normal life.

The richest of these new billionaires is Li Jianquan, Forbes said. He is the president of Chinese medical products manufacturer Winner Medical. The company makes face coverings and medical clothing for healthcare workers around the world. Li is said to be worth $6.8 billion.

Jeff Bezos of Amazon remains the richest person in the world with an estimated wealth of $177 billion. Several others join Bezos in the list of super-rich people with more than $100 billion. They include Elon Musk of Tesla and SpaceX with $151 billion, Bernard Arnault of the French luxury goods company LVMH with $150 billion and Microsoft's Bill Gates with $124 billion. Facebook's Mark Zuckerberg just missed the list with $97 billion.

The list of richest women also increased during the pandemic. There are now 328 women compared to 241 last year.

One of the richest women is MacKenzie Scott. She received $38 billion after her marriage to Jeff Bezos ended in 2019. The amount of money she has grew to $53 billion. During the pandemic, Scott became the world's biggest philanthropist. She gave away $5.8 billion last year to support activist groups for equality, education and public health.

Scott said she planned to give away most of her wealth.

Hai Do wrote this report for VOA Learning English with information from Forbes magazine. Mario Ritter Jr. was the editor.

gross domestic products –n. the total value of the goods and services produced by the people of a nation during a year not including the value of income earned in foreign countries

regulator –n. an official who works for the part of the government that controls a public activity (such as banking or insurance) by making and enforcing rules

luxury –n. something that is expensive and not necessary

philanthropist –n. a wealthy person who gives money and time to help make life better for other people