Update Required To play the media you will need to either update your browser to a recent version or update your Flash plugin.
By Anna Matteo
18 June 2022

On this program, we explore words and expressions in the English language.

Today we talk about "steam." 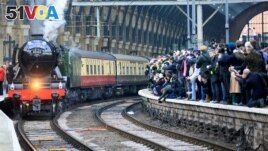 Steam is water heated to the boiling point. Above 100 degrees Celsius, water becomes a gas. When placed under pressure, steam can supply energy for heating, cooking, or mechanical work, as in a steam engine.

"Steam" can mean other things too.

It can be used to mean anger or to describe someone who is angry. For example, it is not healthy to get steamed over every little issue. Life is too short.

Every time a friend of mine receives criticism, she gets steamed for a while. When I learned this about her, I knew to give her time and space to calm down after giving her any suggestions.

"Steam" can also mean energy, active force, or motivation. This kind of steam is good for getting things done.

For example, I once led a large group of people in a big creative project. I knew we needed to work up steam to get the job done. In other words, we would need a lot of energy. I told the team what was needed. I wanted to encourage them to get started. So, I said to them, "Full steam ahead!"

But it is also easy to "lose steam" if you don't plan well. Once, I started a project in the spring but by summer I had run out of steam. I did not have the energy or motivation to finish.

Steam can also mean suppressed emotional tension or frustrations. Life can be busy and full of frustrations and problems. If we don't talk about them, pressure can build up inside us – like a volcano that is ready to blow its top.

When we blow our top, we become angry, often quickly.

So, sometimes we need to "let off a little steam." We need to ease the tension. When we let off steam, we release feelings that we may have been avoiding. We can also say, we need to "blow off steam."

Blowing off steam can mean that we "air out" issues that are bothering us. To air out concerns is a way of easing the pressure in our steam engine. It means to discuss our thoughts openly, so we feel better.

Next time you need to blow off some steam, listen to VOA Learning English and relax with an English lesson!

That's all the time we have for this Words and Their Stories.

motivation –n. the act or process of giving someone a reason for doing something

encourage –v. to make someone more hopeful or energetic

tension –n. a feeling of nervousness or being unable to feel at ease

frustration –n. a feeling of anger or annoyance caused by not being able to do something

relax –v. to make or become loose or less tense