Update Required To play the media you will need to either update your browser to a recent version or update your Flash plugin.
By Mario Ritter
11 June, 2018


American President Donald Trump criticized the United States' trade partners, including those in Europe and Canada, on Monday.

Trump wrote on Twitter that the U.S. will no longer accept what he called unfair trade, even from friendly countries.

"We must put the American worker first," he tweeted. 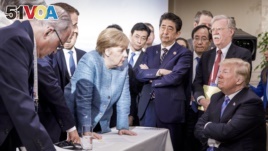 On Saturday, he called the situation "Trade Abuse."

Trump tweeted Monday from Singapore. He traveled there following the meeting in Canada of leaders of the Group of Seven major industrial nations.

The G7 is Britain, Canada, France, Germany, Italy, Japan and the U.S.

The leaders met in the area of Charlevoix, Quebec on June 8 and 9. The discussions were marked by disputes with the United States over trade and Russia. The United States did not agree to the G7 meeting final statement.

After it ended, U.S. President Donald Trump published a tweet that said he had told his trade representatives "not to endorse the Communique."

Canadian Prime Minister Justin Trudeau spoke to reporters at the close of the meeting on Saturday. He said that Canada would order "retaliatory" measures against U.S. products as soon as July 1.

The Trump administration ordered taxes on steel and aluminum imports from Canada and other allies earlier this year.

Trudeau said that Canada would "not be pushed around."

Several leaders said they did not support the idea of Russia rejoining the group of economic powers. Russia was expelled after it took over Crimea in 2014. Members also say Russia continues to support separatists in eastern Ukraine.

Trudeau said he was not "remotely interested" in having Russia rejoin the group.

British Prime Minister Theresa May agreed. She said Russia had failed to meet the terms of the Minsk agreements meant to end the conflict in Ukraine.

Before the meeting, Trump had voiced support for Russia taking part.

On Monday, the U.S. Treasury Department announced additional economic restrictions against five Russian groups and three individuals. The U.S. said they were being punished for harmful cyber activities and ties to Russian intelligence agencies.

Of the disagreements, U.S. Secretary of state Mike Pompeo said, "There are always irritants in relationships." He said he believed relations among the allies would move forward on "a strong basis."

In addition, the document called for preparing workers for future jobs and for gender equality. It stated support for human rights and the rule of law. The communique also stated a desire by some members to support the Paris agreement on climate change and efforts to protect the environment.

As the G7 leaders met in Canada, another international meeting led by China met in Qingdao, China. Members of the Shanghai Cooperation Organization include China, Russia, India and five other Asian countries which meet yearly to discuss economic and border issues.

Mario Ritter adapted it for VOA Learning English from VOA News stories from Chris Hannas and Steve Herman. Caty Weaver was the editor.

endorse –v. to publicly or officially support something or someone

communique –n. an official, important news released by a group of standing

retaliatory –adj. related to something done to hurt someone in reaction to being hurt

sobering –adj. something that is serious, requiring thought

irritant –n. something unpleasant or annoying