The struggle for gay rights in South Korea is not one that can be seen as a conflict between Eastern and Western cultural values.

South Korean lesbian, gay, bisexual and transgender, or LGBT, activists have been influenced by the success of gay rights movements in western countries.

But U.S. activists against gay marriage have also had influence in South Korea. 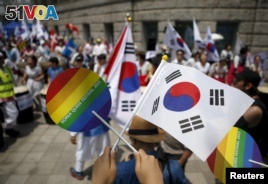 Activists demonstrated for and against gay rights at a gay pride festival in Seoul, South Korea, in June 2015.

Demonstrators at the Gay Pride Festival celebrated the U.S. Supreme Court decision to legalize same sex marriage. The U.S. gay rights movement has helped raised awareness in Asia on the issue. South Korean activists have been encouraged and partly guided by the American experience. Nam Woong is with the activist group Solidarity For LGBT Human Rights Of Korea. He said his country's activists are not following the path of the United States exactly. But he said there are similiarities.

Gay rights opponents also say they get inspiration from other countries. Western missionaries brought Christianity to South Korea. Since the 1950s, Christian representation has increased from two percent to more than 30 percent of the country's population today. And many conservative Christians in South Korea see gay rights as a betrayal of the values they learned from American churches.

Lee Byung-Dae is a spokesperson for the Korean Association of Church Communication. He expressed worry that, in his words, "the values established by the United States are now being destroyed." Reverend Lee said his group has links to 45,000 Christian churches.

Seoul Mayor Park Won-soon is a supporter of same-sex marriage. But in 2014, he withdrew a proposed human rights law after anti-gay activists held a sit-in at City Hall. The failed measure was designed to protect lesbian, gay, bisexual and transgender people from discrimination in the city's larger region.

Reverend Lee said his gay rights opposition group is reaching out to Western churches to help stop what he said is a growing movement to discriminate against Christians.

But, as in the West, public support for gay rights in South Korea is growing. A recent study shows support for legalization of same sex marriage in South Korea increased from 16.9 percent to 28.5 percent from 2010 to 2014. This change in attitude is mainly found among the younger people questioned in the study.

Nam Woong said, "The history of self-expression is short in South Korea. But the speed of change is much faster here."

The U.S. Embassy had a presence at the Gay Pride festival in Seoul. Festival-goers could take pictures of themselves with life-size photos of President Barack Obama and First Lady Michelle Obama.

Mr. Nam said the U.S. has been supporting the Korean gay rights movement for years through diplomatic offices and non-governmental groups.

In June, America's highest court ruled that the U.S. constitution guarantees a right to same-sex marriage. Shortly after, two South Korean filmmakers went to court in Seoul to take part in a similar legal battle. The men, Kim Chokwangsu and Kim Seung-hwan, married in 2013 in a public wedding. They have been seeking legal recognition of their union since then.

The court this week rejected their request saying, "same-sex marriage does not satisfy the definition of husband and wife in civil law." A legal group supporting the couple said it will appeal the South Korean court decision. And the group said it will continue to fight for equal rights for all people, no matter their sexual preference.

Brian Padden reported this story from Seoul. Caty Weaver adapted it for Learning English. Ashley Thompson was the editor.

aware – adj. knowing that something (such as a situation, condition, or problem) exists

encourage – v. to make (someone) more determined, hopeful, or confident

sit-in – n. a strike or protest in which people sit or stay in a place and refuse to leave until they are given what they demand

Do LGBT people have equal rights, including freedom to marry, in your country? We want to hear from you. Post your answer in the comments section.