President Barack Obama plans to call for increased American investment in Africa during his visit to Kenya this week. Investment is important for creating much needed jobs in African countries. Obama administration officials say nearly half of all jobs created in those nations are from small businesses -- many of them owned by women.

So, business programs targeting women can make a difference. In Rwanda, many people suffered in ethnic violence more than 20 years ago.

The Rwandan genocide destroyed families - and left many women to provide for themselves. Today, one Rwandan handicraft exporter has changed the lives of thousands of women with the help of the United States. 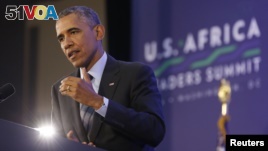 President Barack Obama speaks at the US-Africa Leadership Summit last year. This weekend, he will travel to Africa to call for more investment in the area.

Janet Nkubana and her sister devised a way to help Rwandan women become self-reliant. They sell their hand-made baskets overseas to large U.S. stores like Macy's through her handicraft export company, Gahaya Links.

"We have actually empowered 3,000 women in Rwandan communities."

Janet Nkubana credits the 2000 African Growth and Opportunity Act for opening U.S. markets to African entrepreneurs like her. She also says the government-supported U.S. Africa Development Foundation gave her money and the training needed to launch her business 10 years ago.

Jack Leslie is chairman of the U.S. Africa Development Foundation. He says his organization's aim is to work with underserved people in Africa. He notes that small business creates about 50 percent of the jobs on the continent.

"Africa, to give you a sense, only gets about three percent of foreign direct investment."

Mr. Leslie says President Obama's speech in Nairobi at the Global Entrepreneurship Summit will bring the world's attention to a new wave of economic activity in Africa.

"There is a talk of the Silicon savannah in East Africa, which is really showing amazing leaps in mobile technology."

The U.S. African Development Foundation is working with large American companies like General Electric to provide electricity to more Africans. Jay Ireland is chief executive officer of GE Africa. He says Africa offers a lot of potential for investment. But he says having good roads, ports and other infrastructure is very important to economic growth.

GE, USADF and others are supporting small businesses to develop ways of providing electricity that do not require a huge power system. For Janet Nkubana, investing in entrepreneurs, especially women, is key to the economic empowerment of an entire country.

VOA's Aru Pande reported this story from Washington. Mario Ritter adapted it for Learning English. George Grow was the editor.

devise – v. to think of; to come up with, to invent or plan

self-reliant – adj. dependent on one's self

potential – n. the possibility something will develop