Update Required To play the media you will need to either update your browser to a recent version or update your Flash plugin.
By Alice Bryant
12 June, 2019


In Old Fadama, the largest slum in Accra, Ghana, a government official walks over to a group of men playing a card game. The official carries a hand-held computer. He asks if anyone has time to answer a few questions for an electronic census.

Ghana is preparing for its first electronic population and housing survey. Government workers will be using tablet computers and satellite images to make sure everyone is counted in the survey next March.

Ghana joins Swaziland, Malawi and Kenya as the first countries in Africa to collect such information electronically.

The country has enjoyed more than 20 years of political stability and economic growth. The World Bank reports that, between 1991 and 2012, the country cut its poverty rate in half, from over 52 percent to 21 percent.

Yet when researchers studied the data more closely, they found that some areas had poverty rates as high as 70 percent. That is why the next census is so important. 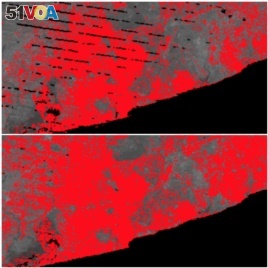 Satellite imagery shows the growth of Accra's urban area between 2010 and 2018. The government is using satellite technology to prepare for its first digital population and housing census in 2020.

The 2010 census questionnaires were on paper. It took months to gather the data, and the count missed about three percent of the population.

Vice President Mahamudu Bawumia says the 2020 census will help fight inequality. He added that the country "must count everyone and make everyone accountable to pay their fair share in taxes." The money would be used to help offer social services to the neediest people, he said at an event in May.

The census is expected to cost $84 million, around 50 percent more than the last one. Ghana's government will employ about 60,000 enumerators, or census takers, to collect the data.

The government is still working with the United Nations on how best to get the 65,000 tablet computers needed to complete the survey. Officials say Kenya may be able to loan the tablets to Ghana after it completes its first electronic census later this year.

Araba Forson is chief statistician for the Ghana Statistical Service. She says technology would prevent sending too few enumerators to heavily populated areas. That is a problem the country had in 2010 because the maps they used were out of date.

"Satellite imagery will tell us that there are people living in this part of the country that the enumerator may not have visited."

The population of Ghana's cities has more than doubled during the past 20 years. The World Bank reports the number rose from 7 million in 1997 to almost 16 million in 2017.

Many people have moved from poorer rural areas in search of work. They joined the millions of street vendors and waste pickers who make up most of Ghana's informal economy. Together with homeless people, they are the "floating population" whom government statisticians want to capture better in their database.

And the risks are higher this time. The census data is to be used in the launch of national identity cards, a project launched by the president in 2017. The new card requires digital address codes, many of which will be created by enumerators during the census.

Naa Ardo-Acquah lives in the Agbogbloshie neighborhood, known as a dumping ground of electronic waste from wealthier nations. She warns that some people living in the slums are suspicious of the ID registration.

She hopes the new address system will stop the government from removing slum occupants from their homes. But distrust remains an issue.

Omar Seidu is with the Ghana Statistical Service. He says publicity and communications teams have developed materials – on paper and audio or video products – to help educate citizens. His team will work closely with community leaders before the census, he said.

Naa Ardo-Acqua said she spent days helping people in Agbogbloshie register for their ID cards at centers set up by the National Identification Authority. She said many of them were disheartened by long lines.

slum – n. an area where poor people live and the buildings are in bad condition

stability – n. the quality of being in a good state or condition that is not easily changed or likely to change

statistician – n. a person who collects and studies statistics

vendor – n. a person who sells things, especially on the street

informal – adj. not according to the prescribed, official, or customary way or manner

address – n. the words and numbers that are used to describe the location of a home or building

code – n. a set of letters, numbers or symbols that identifies or gives information about something or someone