Half Of US Cosmetics Contain Toxic Chemicals

Update Required To play the media you will need to either update your browser to a recent version or update your Flash plugin.
By Anna Matteo
09 August 2021

More than half of the cosmetics sold in the United States and Canada have dangerous chemicals connected with serious health conditions. A new study claims that those conditions include cancer and reduced birth weight in newborn babies.

Cosmetics are substances that you put on your face or body to improve appearance. Another name for cosmetics is makeup.

Researchers at the University of Notre Dame in Indiana tested more than 230 commonly used cosmetics. They found that 56 percent of foundations and eye products, 48 percent of lip products and 47 percent of mascaras contain fluorine.

The Associated Press recently reported on the story and explained fluorine this way. Fluorine is an irritating gaseous chemical element. Fluorine is also an indicator of the so-called "forever chemicals" called PFAS, spelled P-F-A-S. The man-made PFAS molecules contain fluorine and are used in some cooking containers, floor coverings and many other products.

Some of the highest PFAS levels were found in waterproof mascara and long-lasting lipstick. This is just one of the findings of the study published recently in the journal Environmental Science & Technology Letters.

Researchers did additional testing on 29 products found to have higher fluorine amounts. The researchers found they contain between four and 13 specific PFAS chemicals. However, only one of those tested products listed PFAS as an ingredient on its container. 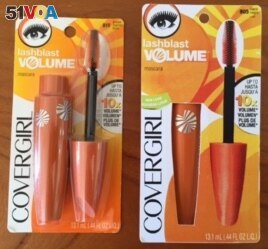 Mascara goes on the eyelashes, making them darker and longer. (Photo courtesy of Pulpworks)

The U.S. Food and Drug Administration oversees cosmetics in the country. A spokesperson for the agency said the FDA does not comment on specific studies. The FDA said on its website that there have been few studies on the amount of the chemicals in cosmetics. And the published studies usually found very low levels of the chemicals. The FDA website also notes that such low levels are not likely to cause harm.

A fact sheet published on the agency's website says, "As the science on PFAS in cosmetics continues to advance," the FDA will continue to analyze data from the cosmetics industry as well as published research.

The U.S. Environmental Protection Agency is also collecting industry data on the use of PFAS chemicals and connected health risks. It is considering regulations to reduce possible risks caused by the chemicals.

On its website the EPA states that PFAS chemicals stay in the environment and in the human body for a very long time. They do not break down and can build up over time. The site adds that there is evidence that exposure to PFAS can lead to several health problems.

PFAS chemicals are an issue of increasing concern for lawmakers who are working to control their use in consumer products. The study results were announced as a group of U.S. senators introduced a bill to ban the use of PFAS in cosmetics and other beauty products.

The move to ban PFAS comes as Congress considers legislation. The legislation aims to set a national drinking water standard for some PFAS chemicals. It also includes cleaning up polluted areas across the United States. Widespread testing in recent years has found high levels of PFAS in many public water systems and military bases.

"There is nothing safe and nothing good about PFAS,″ said Senator Richard Blumenthal, a Democrat from the state of Connecticut. He introduced the cosmetics bill with Senator Susan Collins, a Republican from Maine.

Representative Debbie Dingell, a Democrat from Michigan, has supported several PFAS-related bills in the House of Representatives. She has looked for PFAS in her own beauty products. However, she could not see if they were present because the products were not correctly marked.

"How do I know it doesn't have PFAS?" she asked at a recent news conference. She was talking about the eye makeup, foundation and lipstick she was wearing.

Blumenthal calls himself a fighter for the consumer. Companies that want to avoid possible government regulation should voluntarily go PFAS-free, Blumenthal added.

He said that while he does not wear makeup products, he and his supporters have a message for the cosmetics industry: "We've trusted you and you betrayed us."

Matthew Daly reported this story for the Associated Press. Anna Matteo adapted this for VOA Learning English. Ashley Thompson was the editor.

cosmetics – n. a substance (such as a cream, lotion, or powder) that you put on your face or body to improve your appearance

foundation – n. a cosmetic usually used as a base for makeup

exposure – n. the condition of being subject to some detrimental effect or harmful condition

betray – v. to tell in violation of a trust