Have You Ever 'Stolen' A Kiss?

Update Required To play the media you will need to either update your browser to a recent version or update your Flash plugin.
By VOA
02 January, 2016


Hello! Welcome to the VOA Learning English program, Words and Their Stories, where every word has a story.

The start of a new year is a time of reflection, or deep thinking. Many people plan for the future and, at the same time, feel nostalgic for the past. In other words, they think about the past in a dreamy way – a little happy and a little sad. 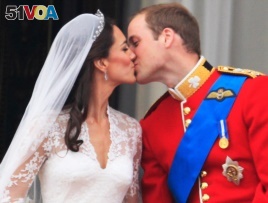 The first kiss: Prince William kisses his wife Kate, Duchess of Cambridge on the balcony of Buckingham Palace. (AP Photo)

Dan Fogelberg was a popular U.S. singer-songwriter during the 1970s. His song "Same Old Lang Syne" is set around the New Year.

When two former lovers – high school sweethearts, perhaps? – meet in a grocery store, they talk about old times and wonder what might have been.

"Lang syne" means at a distant time in the past.

In the first part of the song, Fogleberg writes, "I stole behind her in the frozen foods, and I touched her on the sleeve."

Met my old lover in the grocery store,
The snow was falling, Christmas Eve,
I stole behind her in the frozen foods,
And I touched her on the sleeve.

Fogelberg did not actually steal anything from the store. Stealing would get him arrested. And that would make the song very different.

No, in this case, "to steal" means to do something secretly. You can steal a glance at your secret love from across a crowded room. If someone steals a kiss from you, they sneak up and surprise you with a kiss. If someone steals your heart, they cause you to fall deeply in love with them. And if two lovers steal away into the night, they escape secretly to be together.

Who knew stealing could be so romantic!

Moving on to the next selection from the song, we find two common expressions.

Let's talk about "to be lost in embarrassment."

If you lose yourself in something, an event or emotion takes over your mind and body. For example, I love getting lost in a good book. Lovers get lost in each others' eyes. You can also lose yourself in your work and forget to see family and friends.

Next, what happens when a conversation drags? It does not move smoothly. If two people are embarrassed, their conversation can be slow and awkward. You can also say a book or movie drags if the story lines move too slowly.

Conversations with a former lover can be embarrassing. It can be even more embarrassing if you are still attracted to that person.

Later in the song, Fogelberg writes about his former lover's appearance. He says the "years had been a friend to her, and that her eyes were still as blue."

When you say the years had been a friend to someone, you are saying that they look younger than their age. You can also say that the years have been kind to someone. It is a nice thing to say.

But you can also change this expression around and say the years have not been kind to someone, meaning they look older than they really are.

Steal away by yourself to practice these expressions. Perfecting them will ensure your English conversations won't drag. Or perhaps just lose yourself in this song!

Anna Matteo wrote this for VOA Learning English. Ashley Thompson was the editor.

reflection – n. consideration of some subject matter, idea, or purpose

nostalgia – n. pleasure and sadness that is caused by remembering something from the past and wishing that you could experience it again <A wave of nostalgia swept over me when I saw my childhood home.>

embarrassing – adj. to make (someone) feel confused and foolish in front of other people