Shenandoah and Its Native American Roots

Update Required To play the media you will need to either update your browser to a recent version or update your Flash plugin.
By Herbert Suttfliffe
28 November, 2015


Hello and welcome to the VOA Learning English program, Words and Their Stories.

Every word has its own story. Where did it come from? How did it get into the language?

Hundreds of years ago a Native American chief named Shenandoah lived with his tribes in what is now the state of Virginia. Little is known about Shenandoah, but in some way, the soft sound of his name was given to a river.

The Shenandoah River still flows in a deep valley between the Allegheny and Blue Ridge Mountains, just as it did when Chief Shenandoah lived. It is a slow moving river, soft and as beautiful as its name. 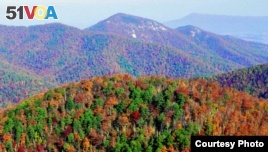 Many nature lovers head to Shenandoah National Park in the U.S. state of Virginia. One of the stories explaining the name Shenandoah is as beautiful as the name sounds. (COURTESY PHOTO)

There are some word experts who believe the word "Shenandoah" means "spruce river" because the waters of the river run through great forests of spruce trees.

And this explanation could be correct.

However, there is an old Native American story which is far more beautiful than that of the experts.

Long ago, centuries before Europeans came to the New World, there was a great lake of sparkling blue water hidden in the mountains of Virginia. This lake was 250 kilometers long and 50 kilometers wide.

For hundreds of years, Native American tribes lived near this lake, feeding on the fish from its clean waters.

The Native Americans often climbed up the mountains and camped there during their long hunts for food. In the evenings they sat near their camp and looked down at the beautiful lake.

On a clear, starry night you could see thousands of stars shining and dancing on the water below. The Native Americans loved this lake, and because they could see the stars in it they called the lake, "Clear Daughter of the Stars."

In their language, the word for this was "Shenandoah."

One day there was a loud crashing sound at one end of the lake. The lake started to disappear. Its water ran out of the valley, through a break in the mountain side. The waters ran on and on until they joined another river which today is known as the Potomac.

At last, the lake was gone. In its place was only a river. It is this way today. The lake is gone, but the beautiful Shenandoah River runs on.

And on a clear night, anyone in the mountains can still see the stars dancing on the water.

Located outside of Washington, DC, the Shenandoah National Park is a popular get-away for people wanting to hike, picnic or nature-watch.

Millions of Americans have seen the Shenandoah and have talked about it.

And some years ago, someone wrote a song about it.

"Shenandoah" is perhaps one of America's most recognizable folk songs. Some say the song refers to the river. Others say it is about the daughter of Chief Shenandoah.

Regardless of what the song is about, "Shenandoah" remains an American classic.

And that brings us to the end of this episode of Words and Their Stories.

This Words and Their Stories was written by Herbert Suttfliffe, with revisions by Anna Matteo. The Norwegian soprano, Sissel, sings the version of "Shenandoah" heard in this program.

Now it's your turn! Practice with the adjectives "sparkling," "dancing," "cascading" and "serene" to describe a nature scene where you live.

sparkling – adj. to give off small flashes of light <The diamond sparkled.>

cascading – adj. to flow or fall rapidly and in large quantity

vista – n. a large and beautiful view of an area of land or water

serene – adj. being calm and quiet