Update Required To play the media you will need to either update your browser to a recent version or update your Flash plugin.
By Anna Matteo
03 October, 2015


Hello and welcome to the Voice of American Learning English program Words and Their Stories.

Do you have an enemy? Hopefully, you don't. An enemy is someone who hates you and you hate them back. An enemy threatens you, attacks you or tries to harm you.

In some languages, there are different words for a personal enemy versus an enemy of war, political enemy or enemy of the state. 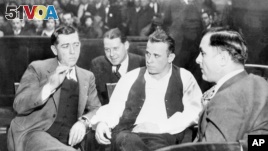 In English, however, they are all called the same - enemies.

We do have other words to describe an enemy. Adversary, foe and opponent are the most common.

However, if you do have enemies, I have some advice for you.

"Keep your friends close and your enemies closer." Many believe the Chinese military genius, Sun Tzu, wrote something like this in his book The Art of War. Others say Machiavelli wrote this sentence in The Prince.

We may not know for sure who said it first. But many know who said this line in the movie The Godfather II. Gangster boss Michael Corleone advises a member of his crime "family" on how to deal with an enemy who is causing trouble.

Here is another piece of advice, "An enemy of my enemy is my friend."

Let's say you have two enemies who also hate each other. If you are smart, you may be able to use their hatred of each other to get what you want.

Let's say you don't have a formal enemy. But what if you have a friend who treats you badly? People around you might say, "With a friend like that who needs enemies?" This expression means that if a friend treats you badly, they behave as an enemy. It also means you should get another friend.

Public Enemy No. 1 is a status given to the worst criminals in the United States. During the Great Depression, John Dillinger was named Public Enemy No. 1. He was a killer, bank robber and the most feared gangster in the U.S. A gangster works in a group of people, like a network, or system.

Throughout the years several artists have borrowed this expression.

An earlier film made in 1931 titled The Public Enemy is also a gangster film starring James Cagney.

Public Enemy is also a famous hip hop group that came out of Long Island, New York in the 1980s.

If you have many enemies, you may have to rank them in order of importance. Your archenemy is your main enemy. For example, "The two politicians were archenemies."

A great word that means the same as your archenemy is nemesis. A nemesis is an opponent that is very difficult to defeat. Your nemesis is always looking to destroy you.

Sometimes you don't need an enemy. Some people fail on their own. These types of people sometimes do not realize they are making things hard for themselves – that they are their own worst enemy.

So, if you know someone like this, you can say to them, "Life is hard enough. Don't be your own worst enemy."

Do you know some expressions or quotes about enemies in your language, translate them into English ... in the Comments Section.