Let’s Go on a Space Trip!

Update Required To play the media you will need to either update your browser to a recent version or update your Flash plugin.
By Anna Matteo
01 August, 2015


For this Words and Their Stories, we leave Earth and travel deep in space.

Let's join two astronauts who have been stuck in their space ship together for several months. And tensions are running high. Or in other words, they are not getting along.

Let's listen as they use a variety of space expressions. 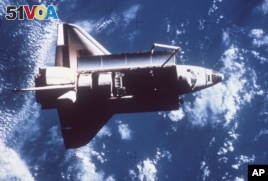 This photo is the first showing the complete space shuttle Challenger orbiting the earth. (1983 / AP Photo)

Roger, Mission Control. This is Odyssey 14 logging out. Okay, we are officially done working for the night.

Great! Movie time! How about Failure to Launch?

Not that movie again!

What? It's a great film.

It reminds me of your friend, Marco from New York. The one you talk about all the time!

Marco did not fail to launch. He's just saving money to buy his own place.

Marco is a classic example of a failure to launch. He still lives at home with his parents and doesn't have a real job.

Yes he does. He gets paid to take part in drug studies.

Like I said, he does not have a real job. Besides, I'm sick of hearing about him. So, enough already!

Okay, okay. Calm down. You know, I had to hear about your space cadet friend for weeks and weeks. What's her name?

Nina? She is not a space cadet. She's actually very smart. She just, um, spaces on some basic life skills.

She forgot that she needed a driver's license to drive a car. That is a pretty basic life skill to space on. She sounds like a total space case to me – nothing upstairs.

Oh, forget it. When it comes to our friends, we are not on the same wavelength. Let's just agree to disagree.

Speaking of not being on the same wavelength ... we do not agree on something else.

Uh-uh. No way! We do not have enough fuel to dock on ISS. Anyway, you just want to see that Russian astronaut.

That is not true. Well, maybe, it's a little true. But I only see her once in a blue moon, which, as you know, is almost never.

Did you know a "blue moon" is not really blue. Every month has a full moon. But because the moon's cycle is not in line with the calendar about every three years we get two full moons in the same calendar month. So, a blue moon only happens every two to three years. Just amazing!

And it's been almost that long since I've seen her -- Natasha! I think she is involved with someone on the space station.

Don't make fun. This is serious.

Well, we do say that when we want to joke that something that has gone wrong. But did you know that that is exactly what astronaut Jack Swigert said in 1970 on the Apollo 13 mission when an oxygen tank blew up. And here we are ... up here.

I get it. I get it. But please, don't give me any more facts. Anyway, I'm light years ahead of you. I have already programmed the computer for arrival at the ISS.

What? Are you crazy?! When it comes to making decisions with your crewmate, you are light years behind even the worst astronaut!

Say what you want. But wait until you see this Russian astronaut. She is out of this world!

Of course, she's out of this world. She lives on a space ship!!

I can't wait for someone else to talk to.

You and me both.

Welcome back to earth! I hope you enjoyed this space-age trip for this Words and Their Stories.

Anna Matteo wrote and produced this Words and Their Stories for VOA Learning English. Jonathan Evans joined Anna as the astronauts. Caty Weaver was the editor.

Expressions in This Story

space cadet – 1. n. informal a person perceived as out of touch with reality; 2. n. a trainee astronaut, an enthusiast for space travel, typically a young person

space case – n. slang a person who is not in touch with reality

out of this world – informal extremely enjoyable or impressive