Update Required To play the media you will need to either update your browser to a recent version or update your Flash plugin.
By Anna Matteo
03 July, 2015

Independence Day is a huge celebration in the United States. People celebrate by having parades and picnics and usually end the day with fireworks. So what do some of these words mean?

Cities and towns, large and small, across the U.S. close their main streets to make way for Independence Day parades. Clean and shiny firetrucks and school marching bands parade down the streets lined with people watching and cheering.

Parade floats, which are decorated vehicles, carry local stars, like the child who won the spelling bee or the winner of a local beauty contest. 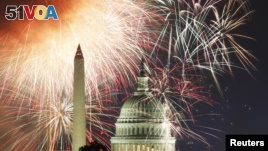 Fireworks light up the sky over the United States Capitol dome and the Washington Monument in Washington July 4, 2011 . (REUTERS/Hyungwon Kang)

People work very hard making a parade. So, the worst thing to happen on parade day is rain. To rain on someone's parade is to ruin something for someone else. Here's an example: "I hate to rain on your parade, but the guy you like is not coming to the party."

On Independence Day people in the U.S. like to eat outside. Friends, family, and neighbors will come together and picnic. Picnics are easy and fun. So, when something is difficult we say it is no picnic. "Taking the TOEFL exam is no picnic. I studied for months and it was still so hard! "

Many people around the world celebrate important days with fireworks, including the United States. Independence Day fireworks shows are explosive, bright and colorful.

The word "fireworks" can be used in other situations, both good and bad. For example, if two people are having a fiery argument others may tell them to "stop all the fireworks." Fireworks, in this case, are a bad thing.

But, good fireworks are exciting and beautiful, like falling in love. A kiss or touch of a lover's hand can create fireworks between two people. Even couples who have been married for many years but who are deeply in love can have fireworks explode each time they kiss.

If you want to see real fireworks in the U.S., visit during the 4th of July. The U.S. traditionally celebrates its freedom with huge, outdoor public gatherings and fireworks at night.

They also play songs that that celebrates the American dream. You might hear Neil Diamond's "America," a song that honors the American Dream and America's immigrant experience.

Some songs are about the dream of the American Dream, one that perhaps did not happen. In his song, "American Tune" famous singer/songwriter Paul Simon paints a more complex view of the American experience. He sings of weariness, hard work and homesickness but promises that in the end it will be all right.