When It Comes to Money, Black Is Better Than Red

Update Required To play the media you will need to either update your browser to a recent version or update your Flash plugin.
By Frank Beardsley
25 April, 2015


Now, Words and Their Stories, a VOA Special English program about American expressions. I'm Rich Kleinfeldt with some financial words and expressions used in business and the stock market.

Our first expression is "in the red." It is another way of saying that a business is losing money. In the past, numbers in the financial records of a company were written in red ink to show a loss.

A business magazine recently published a report about a television company. The report said the company was still in the red, but was able to cut its loss from the year before. 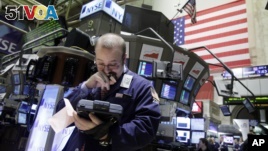 You can often tell from their faces if traders working the floor of the New York Stock Exchange are in the black or in the red. (AP Photo/Richard Drew, 2010)

A profit by a business is written in black numbers. So a company that is "in the black" is making money. An international news service reported that a private health insurer in Australia announced it was "back in the black with its first profit in three years."

Newspaper reports about a banking crisis in Russia used that expression. They said the government acted because of fears that the crisis would cause a run on the banks.

"When a run on the banks was starting, there was not much they could do," said a banking expert.

"Day trading" is a new expression about a system that lets investors trade directly on an electronic market system. The system is known as NASDAQ, short for The National Association of Securities Dealers Automated Quotation. It was the first completely computerized stock market. It sells stocks of companies not listed on any stock exchange. Many high technology companies are listed on it.

Day trading companies provide a desk and a computer system to an investor who wants to trade. Individuals must provide fifty thousand dollars or more to the trading company to pay for the stocks they buy. Thousands of other investors do day trading from computers in their homes.

A day trader watches stock prices carefully. When he sees a stock rise in price, he uses the computer to buy shares of the stock. If the stock continues to rise in price in the next few minutes, the day trader sells the shares quickly to make a small profit. Then he looks for another stock to buy. If a stock goes down instead of up, he sells it and accepts the loss.

The idea is to make a small profit many times during the day. Day traders may buy and sell stocks hundreds of times each day.

Many day traders lose all their money in a week or so. Only about thirty percent succeed in earning enough from their efforts to continue day trading.

This VOA Special English program, Words and Their Stories, was written by Frank Beardsley. This is Rich Kleinfeldt.