Not All Mother Expressions Are As Nice As Mom

Update Required To play the media you will need to either update your browser to a recent version or update your Flash plugin.
By Anna Matteo
09 May, 2015


Now, the VOA Learning English program Words and Their Stories. Each week at this time, we tell about everyday expressions in American English and how to use them.

In the United States, Mother's Day falls on the second Sunday in May. It was back in 1908 when a woman named Anna Jarvis created this unofficial holiday to honor mothers. However, Ms. Jarvis would later criticize Mother's Day. She said it had become too commercial -- too much about spending money.

She had a good point. 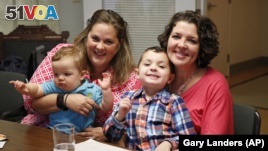 Pam Yorksmith, left, and her spouse Nicole Yorksmith, pose with their children, Grayden, 4, and Orion, in this April 2015 photo. (AP Photo/Gary Landers)

Traditionally, children and husbands celebrate mothers of all ages by buying flowers, cards and other gifts or taking them to dinner in a nice restaurant. But today, you will not need any money at all. We instead will talk about some expressions that use the word "mother."

To start with, most mothers give birth. So, your motherland is where you were born and your mother tongue is your native language.

Some cultures believe Mother Earth gave birth to everything that exists on our planet. In Greek mythology, a goddess named Gaia was the great mother of all. She was said to have created the Earth and the Universe. Mother Nature is a little different. This term relates to the natural world as if it were a woman.

It has been said that there is nothing as great as a mother's love. Some mother expressions mean just that. The mother lode comes from mining. It means the place where the largest amount of gold, silver, or anything else of value can be found.

But now, the term mother lode means a rich supply of anything. We often use the word "strike" with this expression. For example, you might say, "She just graduated college and struck the mother lode with her new job!" In other words, the woman's new job is making her rich!

When we call something "the mother of all," this means it is the biggest or best of something. Here is an example: "We are going to throw the mother of all parties this weekend. So you have to come!"

Naturally, the word "mother" can be used to mean to give birth, even to something you cannot touch, such as an idea or wisdom. The saying "necessity is the mother of invention" means that when people really need to do something, they will find a way to do it. And "experience is the mother of wisdom" means that people learn from what happens to them.

You might think all expressions about mothers are sweet and loving. Not so.

A show about mothers would not be complete without talking about the very popular but mysterious Mother Goose. The short poems and songs that Mother Goose supposedly wrote are very much a part of growing up in the United States. Real or not, you could say Mother Goose is the mother of all nursery rhyme writers.

We do know that writer Robert Louis Stevenson was real. He is famous for such stories as "Treasure Island," and "The Strange Case of Dr. Jekyll and Mr. Hyde." He also wrote this poem titled, simply, "To My Mother."

You too, my mother, read my rhymes

For love of unforgotten times,

And you may chance to hear once more

The little feet along the floor.

To all mothers of all types around the world, we here at VOA Learning English wish you a very Happy Mother's Day!

Anna Matteo wrote and produced this program. Jim Tedder read the poem "To My Mother."