Update Required To play the media you will need to either update your browser to a recent version or update your Flash plugin.
By VOA
08 May, 2015


The largest chicken meat producer in the United States says it will stop giving its birds antibiotics that doctors use to treat humans. Tyson Foods made the announcement April 28. It said it plans to complete the change by 2017.

Health experts say overuse of the medicines is part of the reason more bacteria are becoming resistant to them.

Farmers have fed livestock small amounts of antibiotics for many years. The drugs help the animals grow faster and prevent the spread of sickness among farm animals that live close together. 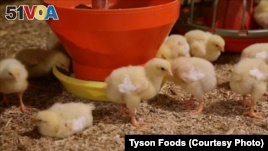 Small regular doses of antibiotics help animals grow faster and prevent illness in confined flocks and herds, but bacteria living in and on the animals eventually become immune to the antibiotics.

But bacteria living in and on the animals develop and become immune to the drugs. In other words, the antibiotics no longer have any effect. These drug-resistant bacteria then enter the bodies of people who eat the birds or livestock. Then, infections in humans become more costly and difficult to treat. Sometimes, treatment does not work at all.

Donnie Smith is the president of Tyson Foods. He says the company has already begun reducing its use of antibiotics.

"As a result of our efforts, only a very small percentage of our chicken flocks receive human antibiotics today."

He says the company will stop giving its birds antibiotics by the end of 2017.

Sasha Stashwick is a policy expert at the Natural Resources Defense Council, and environmental group. The NRDC has been calling for an end to the use of antibiotics in animals for many years. Ms. Stashwick says other companies have recently announced their decision to end the use of the medicine in the animals they produce.

"...we're seeing that over a third of the industry at this point either has eliminated the use of medically-important antibiotics in its production or has made a public commitment to do so within the next few years."

While the use of antibiotics in birds and livestock is decreasing in the U.S. and Europe, it is expected to increase in the developing world. There is a growing demand for meat there. Livestock producers in those countries are using methods that require antibiotics to keep animals healthy.

Ramanan Laxminarayan is the director of the Center for Disease Dynamics, Economics and Policy. He says Tyson's announcement shows food producers can continue to operate without using the drugs.

Mr. Laxminarayan says if producers provide cleaner living conditions and better nutrition for their animals, they will not need to give them antibiotics. But he says the buying public must pressure farmers to stop using the drugs.

antibiotic – n. a drug that is used to kill harmful bacteria and to cure infections

flock – n. a group of birds or animals (such as sheep)

eliminate – v. to remove (something that is not wanted or needed)

Are infections in people in your country becoming resistant to antibiotics? Do large food producers give antibiotics to their animals? We want to hear from you. Write your thoughts in the comments section.