Update Required To play the media you will need to either update your browser to a recent version or update your Flash plugin.
By VOA
02 March, 2015


The Paris International Agricultural Show is the biggest farming event in France. The show has plenty of farm animals, growers and other people every year.

This year some of those attending considered the effects of climate change on farm production. Farmers and experts from around the world spoke about ways to prepare agriculture for a more difficult and possibly uncertain future.

Bigger droughts, more flooding and stronger storms are some of the effects that climate change has brought to our planet. Farmers are reacting to the effects of rising temperatures. But many small family farmers in developing countries suffer because of the changing conditions. 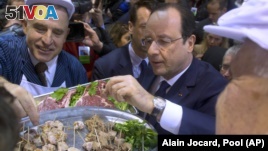 By the year 2050, farmers will have to feed a world population of about 9.6 billion. Just over seven billion people are alive today.

Jose Graziano da Silva is Director-General of the United Nations Food and Agricultural Organization. He says that to deal with climate change, agriculture must become more sustainable, more resilient and more widely available. He says even the poorest people have a right to food.

"Always, the poorest and the smallest are the most vulnerable. Starting from the fact they are already in marginal awareness, so they are the first that are affected by a drought or by a flood that are let's say the current, ongoing impacts of the climate change."

The UN's Food and Agricultural Organization chief spoke at an international meeting in Paris. He and other delegates looked at the issue of climate change and agriculture. A major UN climate conference will take place in the French capital in December. The goal of those talks is to reach an international deal to cut greenhouse gas emissions. Studies have found links between such gases and rising temperatures.

French President Francois Hollande said the U.N. conference will not settle all the climate change problems. But he said it must at least give the world a reason for hope. He said it is important to define a plan of action to fight climate change, and agriculture must be part of the solution.

Evelyn Nguleka of Zambia is President of the World Farmers Organization. She told VOA that farmers are looking for real solutions.

"Because it is one thing just to send out an alarm that there is going to be weather pattern changes. But what is important for the farmer is how is a farmer going to be able to survive? So resilience for us is a key word - and of course, that goes with innovations."

Nadjirou Sall of northern Senegal heads an organization called ROPPA. It represents West African farmers. He said the area where he lives has been dealing with long, dry weather for many years.

He said the Paris climate conference will be useful if it considers the problems of family farmers like himself. If not - as far as he is concerned - it will be a failure.

drought - n., a long period of time during which there is very little or no rain