Update Required To play the media you will need to either update your browser to a recent version or update your Flash plugin.
By Pete Musto
16 July, 2016


EDITOR'S NOTE: This story is part of a new ongoing series about international student life at colleges and universities across the U.S. Please join us over the next several weeks as we bring you stories about these amazing individuals and the American higher education system as a whole.

Diversity has been a major concern at U.S. universities in recent years. Most schools try to attract a wide mix of students. They want students from different racial, religious, geographical, and economic backgrounds.

Konstantinos Papageorgiou is from Greece. Nik Azmin is from Malaysia. And Soulin Reyes is from Venezuela.

The one thing all three students have in common is that they all study at George Mason University. The large university is one of the most diverse in the United States. It attracts students from 130 countries.

Papageorgiou, Azmin, and Reyes chat over coffee at the Johnson Student Center at George Mason University.

George Mason University, or Mason for short, is located in Fairfax, Virginia -- less than an hour outside of Washington, D.C. Mason was once part of the University of Virginia. But the schools separated in 1957 and now Mason is the largest public research university in Virginia.

In addition to the Fairfax campus, there are three other Mason campuses in Virginia, and one in Songdo, South Korea.

Papageorgiou, Azmin and Reyes all enjoyed the international feel of Washington, D.C., the U.S. capital city. So they wanted to stay close to when they started looking for schools where they could earn their undergraduate degrees. 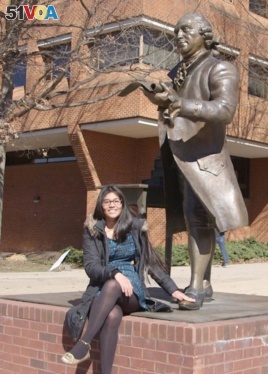 Soulin Reyes at the George Mason statue. It is considered good luck to rub the statue's foot.

She heard of Mason from her uncle, who had studied there in the past. Reyes was pleased with Mason's international feel when she started studying there in 2014.

"When I first arrive, I was hanging out with a bunch of Saudi people and they became, like, really nice friends of mine. And also, they start teaching me how to speak in Arabic. ... Also now I have a best friend that is from Mexico. Even though we have the same language, we have different dialects. So it's like I learn something from her and she learns from me."

Papageorgiou's father worked in the Greek navy and his family moved to the Washington, D.C. area when Papageorgiou was in high school.

He began studying economics at Mason in 2011. He says he had trouble at first understanding some of the more complex parts of the English language. But sharing these difficulties with other international students helped him.

"It was hard for me to understand the native speakers. ... If they were being polite or if they're being sarcastic, I couldn't tell the difference. I was always questioning them. But there were other kids in my situation, so I had no issue adjusting."

Papageorgiou lived in housing provided by the university called dormitories, or dorms, for his first two years at Mason. Students live together in these large buildings at almost every university across the U.S. At George Mason University, most first-year students are required to live in the dorms.

Papageorgiou says living in the dorms was a very fun experience. He met and made friends with American and international students. He also says that he and his friends had some crazy parties. One time, one of his friends even cut off both of his eyebrows! 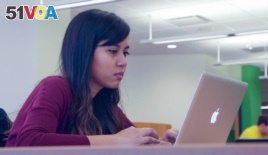 Azmin joined her mother in the Washington, D.C. area when her mother came to work at the Malaysian embassy.

She says before she came to study public relations at Mason in 2012, she was afraid.

"When I knew that I was coming here I was really shocked... because of everything that the movies told me. These perceptions about university as party life and I wasn't about that. ...But ... what you see in the movies isn't what you see in real life."

Azmin says some students focus more on their studies and others focus more on social activities. It may take time, she adds, but students can find their place at Mason if they try.

The center for international students at George Mason University

Reyes says that her education at Mason has helped her decide to open her own business in the future. She also says she found her passion by joining Azucar, the Mason student group that celebrates the Latin American style of dance called "salsa."

The only problem she still has is with fully expressing herself in her classes, she says.

"Sometimes I feel nervous to talk. I know the answer and it's killing me inside ... but I'm afraid that when I talk it will be wrong or I will misspell it ... and I will look dumb and I don't want to do that."

Students should know they will grow with each problem they learn to solve, Papageorgiou adds.

"Every day is different. You don't know what to expect... It builds up your own character. Each day you, kind of, evolve and you become the person that you are today." 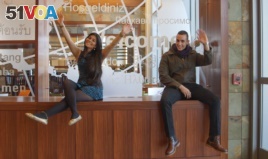 Papageorgiou hopes to complete his degree in 2016. Most students in the U.S. finish their undergraduate degrees in four years and Papageorgiou has been at Mason for five years.

Yet, Papageorgiou says none of the time he has spent at Mason has been wasted. Every memory is like a lesson of how to be more of an adult and a better person.

Pete Musto reported on this story for VOA Learning English. Adam Brock produced the video. Hai Do was the editor.

background(s) – n. the experiences, knowledge and education in a person's past

undergraduate degree(s) – n. a degree that is given to a student by a college or university usually after four years of study

dialect(s) – n. a form of a language that is spoken in a particular area and that uses some of its own words, grammar, and pronunciations

sarcastic – adj. using words that mean the opposite of what you really want to say especially in order to insult someone, to show irritation, or to be funny

adjust(ing) – v. to change in order to work or do better in a new situation

dormitories – n. buildings on a school campus that has rooms where students can live

eyebrow(s) – n. the line of hair that grows over your eye

orientation – n. the process of giving people training and information about a new job or situation

class(es) – n. a series of meetings in which students are taught a particular subject or activity

misspell – v. to say, write, or print the letters of a word or name incorrectly

dumb – adj. not showing or having good judgment or intelligence

character – n. the good qualities of a person that usually include moral or emotional strength, honesty, and fairness