Update Required To play the media you will need to either update your browser to a recent version or update your Flash plugin.
By Anna Matteo and Pete Musto
18 April, 2016


A few days ago, a man named Arif ran barefoot with his family from an Iraqi village as American fighter jets dropped bombs from above.

They walked 25 kilometers through deserts and valleys. They crossed fields filled with landmines.

After more than a year and half of living under the Islamic State, Arif and his family were finally free. 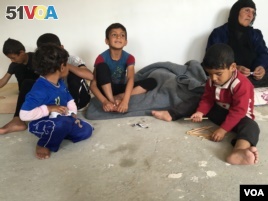 Iraqi refugee children who fled IS with their families playing on the concrete floor of their new home in a camp outside Makhmour, Iraq, April 11, 2016. (S. Behn/VOA)

They are not alone. Arif and his family have joined 6,000 others in a small Kurdish-run camp. The camp is built on rocks and mud. It is there to take in villagers fleeing the Islamic State as the Iraqi army started its push to retake the area south of Mosul.

From interviews with five men, we learn what life was like under the Islamic State. Some of the men are single, some are fathers, and some are only teenagers. Most of them did not give their full names. They said they fear IS will hurt their relatives left behind.

Arif is a former Iraqi military man himself. He was one of many Sunnis who stayed in their village when the largely Sunni extremist group Islamic State took over in 2014.

Lack of jobs and money

Arif is like several of the men who risked their lives to reach this camp. He described a difficult life in his village that soon became unlivable. There were few jobs. And the jobs that were available were badly paid or dangerous. Families were running out of money.

IS was running out money, too. So, the militants demanded money from people with threats of physical harm. The men said IS members forced former Iraqi police officers to pay a $2,000 fee or be killed.

Ahmed is another refugee living in the camp. He said most IS members get paid very little, about 60,000 dinar, or $50, a month. So they smuggle people to get money for themselves.

He added that an IS member would convince you to sell cigarettes in the neighborhood. Once you began selling them, they sent another IS member to take the cigarettes and all the money you had made.

Among the crowd of men is teenager Saifuddin Mohamed. He said that IS took him and beat him badly for selling cigarettes. "It was a warning," he said. "After that, I stayed home."

Schools also cost money under the Islamic State's rule. Many villagers did not have enough money to pay and their children stayed at home.

Ahmed Saleh Mohammed is from Kudela village. He said IS schools only teach about "bombs, how to use guns, how to identify tanks and weaponry."

Saleh Mohammed said IS cared less about the children in villages. But in the cities, they forced children to attend IS-run schools.

Wearing a jersey, Saleh said when they tried to play football, the militants would "come and shoot rounds in the air just to keep us from playing."

"I have not received a salary for a year and a half, so it was extremely difficult to support my family. There are no salaries," he said.

He tried to sell mobile phones to support his family. But after a while, he said, no one in his community had any money to buy anything.

The IS also demanded car owners to register their vehicles. Saleh did not have enough money to pay. At that point, he said, he could neither drive the car nor sell it.

The Islamic sects known as Sunni and Shi'ite have been in conflict long before the rise of IS. Now the Islamic State has declared its Sunni extremist version of an Islam as the rule of law it will use.

IS claims it will use this form of Islamic law to create a caliphate across Iraq and Syria.

Some of the conservative Sunni villagers see life under IS control as normal.

"No one from IS actually did anything to harm us," said a female relative of Saifuddin Mohamed.

"They gave us orders to wear the niqab and we followed it."

"The biggest problem we had was financial. We could not support ourselves. And this applies to most of the families in our village. Men were sitting at home without jobs, we could not feed our children -- and the bombings, that is why we left."

The men talked about how the Islamic State was quick to punish anyone who spoke against their rules. People who disobeyed or protested would disappear

"My brother-in-law was taken by IS a year or so ago. He was a former military commander. No one knows where he is. We don't know if he is in prison or dead," said one young man, standing outside the camp mosque.

After a person disappeared, he said, the family of that person would get a single document. The document would state the person was dead. But, the young man said, sometimes a family would get that paper, and the missing family member actually returned.

Sharon Behn wrote this story for VOANews. Anna Matteo and Pete Musto adapted it for Learning English. Kathleen Struck was the editor.

What do you think of the conditions of refugees? Please leave a comment, and post on 51VOA.COM.

jet(s) – n. a fast airplane that has one or more jet engines

beard(s) – n. the hair that grows on a man's cheeks and chin

smuggle – v. to move someone or something from one country into another illegally and secretly

round(s) – n. a shot fired from a weapon

ambulance – n. a vehicle used for taking hurt or sick people to the hospital especially in emergencies

salary – n. an amount of money that an employee is paid each year