Update Required To play the media you will need to either update your browser to a recent version or update your Flash plugin.
By George Putic
22 December, 2014

But the Lockheed Martin announcement has met with disbelief. Critics say nuclear fusion as a power source that can be sustained over time will not be developed anytime soon. But they also say that once the process is ready, it will be as huge a development as the discovery of electricity. Whenever it arrives, nuclear fusion promises to be the future source of cheap and safe energy.

About 400 nuclear power plants operate in the world. All create heat by fission – dividing atoms of heavy, radioactive elements like uranium and plutonium. Such plants cost a lot to build. But they also provide a huge amount of energy. Still, their highly radioactive fuel makes them dangerous. 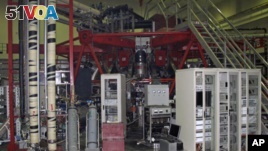 Experimental nuclear fusion reactor is seen at a laboratory in the Southwest Institute of Physics in Chengdu, Sichuan Province. (File)

There is also the problem of what to do with still dangerous spent, or used up, fuel. Also, the fusion plants can be used for building nuclear weapons.

Fusion provides a much safer way to use nuclear power for creating electricity. But it is much more difficult to do this process, which is the opposite of fission. Both the U.S. and European Union have been experimenting with fusion reactors. They say they do not expect them to operate for many years.

David Ingram leads the Department of Physics and Astronomy at Ohio University. He says a fusion reactor would be a welcome development.

Scientist Ingram says fusion reactors use isotopes of the lightest element, hydrogen. He says they make a million times more energy than released from burning coal.

Scientists also say there would be no danger of explosions, unlike today's nuclear centers. The researchers also say fusion reactors could not have a core meltdown, such as those that happened at the Chernobyl and Fukushima reactors.

VOA's George Putic wrote this report from Washington. Jeri Watson adapted it for Learning English. Caty Weaver was the editor.

prototype – n. an original model on which something is patterned

radioactive – adj. having or producing a powerful and dangerous form of energy called radiation

isotope – n. any one of various forms in which the atoms of a chemical element can occur

fuse – v. to join or become joined because of heat or a chemical reaction