Update Required To play the media you will need to either update your browser to a recent version or update your Flash plugin.
By Mario Ritter, Jr.
22 April 2020


War and unrest around the world have forced over 70 million people from their homes. Up to 10 million live in refugee camps or unofficial settlements.

Experts are warning that lack of medical services and low rates of testing for the new coronavirus leave those displaced at risk.

Jan Egeland leads the Norwegian Refugee Council. He notes that, "Testing is in short supply even in New York and Norway, but it is nonexistent in most of the countries in the (global) south for the people we try to help."

The Norwegian Refugee Council recently carried out a study of all 30 countries where the group operates. It found almost no testing of people for the coronavirus before they became sick. 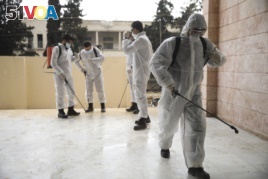 In Syria's Idlib province, for example, only a small number of health care centers are equipped to deal with coronavirus cases. The virus has already appeared in Syria, where a nine-year-old civil war has displaced more than 10 million people. The situation there remains very dangerous. More than 900 medical workers have been killed in the fighting.

Zaher Sahloul is a Syrian doctor based in the United States. He leads MedGlobal, an international health group. He said it is a "miracle" that no coronavirus cases have been reported in Idlib province.

He noted that the province is home to 4 million people and has 98 ventilators – machines that assist patients with breathing. He said an outbreak of the disease COVID-19 would be "catastrophic."

Many places are far less prepared to deal with the coronavirus pandemic.

‘No doctors can save us'

There has been little if any testing for the virus at Cox's Bazar in southern Bangladesh. There, more than one million members of Myanmar's Rohingya Muslim minority live in the world's largest refugee camp.

Kate White works for the aid group Doctors Without Borders. She said there is "very limited testing capacity" in Bangladesh and most of it is in the capital, Dhaka, 400 kilometers away.

Cases have been reported around Cox's Bazar, but none inside the camp. Humanitarian workers are preparing for the possibility that the virus could come.

The United Nations refugee agency is building isolation and treatment centers that can hold 150 to 200 patients. It is giving out soap and talking about how to prevent the spread of the virus.

But Sakina Khatun is worried. She lives with her husband and seven children in a small, temporary structure. She warns, "The virus will kill everything it touches" if it enters the camp. "No doctors can save us then," she said.

‘It will certainly come back'

In parts of Africa, many people also are concerned. In Burkina Faso, for example, 800,000 people have fled attacks by extremists in recent months.

Boureima Gassambe and about 600 other people settled in an unused school building near the capital, Ougadougou. There, up to 30 people stay in each room.

"We ran away from the terrorists and came here, but now there's the coronavirus, and we don't know what will happen," he said.

Burkina Faso's health system is weak. It has only 60 emergency care beds and a few ventilators for a population of 20 million.

In Kenya, hundreds of thousands of refugees live in camps. John Kiogoro of the International Rescue Committee said there is no coronavirus testing in two of the biggest camps, Kakuma and Dadaab. There are no emergency care rooms or ventilators either.

The situation is worse inside neighboring Somalia, where 2.2 million people live in settlements for the displaced. The settlements have no testing areas or equipment to treat those who become infected.

In South Sudan, more than 180,000 people live in crowded U.N.-operated camps and depend on aid workers for most of their services. Charles Franzen is with World Relief. He said his aid group is not in a position to do very much. "The reality is, if the virus presents itself, we have no choice," he said.

Egeland of the Norwegian Refugee Council says the danger faced by refugees is not limited to faraway places, but can affect Europe and the United States.

"If the pandemic survives in Venezuela or in Honduras or any other of the more vulnerable countries..." it will be a permanent risk to the United States, Egeland said. He added that if the virus spreads from Europe to places in Syria, "it will certainly come back to Europe."

province –n. a large division or part of a country

miracle – n. an unusual or wonderful event believed to be caused by the power of God

outbreak – n. the sudden appearance of something like conflict or disease in a large area

pandemic –n. the fast spread of a disease over a large area that affects many people

isolation –n. the state of being in a place or situation that is separate; the condition of being kept alone