Update Required To play the media you will need to either update your browser to a recent version or update your Flash plugin.
By VOA
05 November, 2015
Country music singer Miranda Lambert has a great career going for herself.

The key word being "herself." 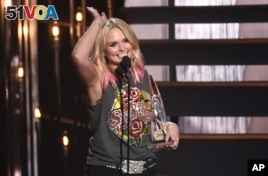 Miranda Lambert accepts the award for female vocalist of the year at the 49th annual CMA Awards at the Bridgestone Arena on Wednesday, Nov. 4, 2015, in Nashville, Tenn. (Photo by Chris Pizzello/Invision/AP)
For a few years, Lambert shared the spotlight with her equally famous husband, Blake Shelton.

But the couple divorced earlier this year after being married for four years.

Now Lambert is on her own again.

And she won one of country music's biggest awards on Wednesday night.

Lambert earned the Female Vocalist of the Year award for the sixth year in a row.

"I needed a bright spot this year," she said.

Shelton is perhaps more famous for his role as a judge on the television talent show "The Voice." He confirmed rumors that he was dating another star singer, also a judge on "The Voice," Gwen Stefani. Stefani is famous for singing with the rock band "No Doubt."

Shelton won last year's Male Vocalist of the Year award but did not win anything this year. Instead, Chris Stapleton won three big awards.

But he deferred most of the spotlight to Stapleton, known more as a songwriter than a singer.

Stapleton wrote hit songs for Bryan, Darius Rucker, George Strait and other country music starts before releasing his own album.

"Watching Chris Stapleton have this night is so uplifting," Bryan said.

Stapleton said he dedicated his album to his father, who died two years ago.

The three-hour show at a sports arena in Nashville was a mix of award presentations and live music performances. Most of the singers who received awards performed – including Stapleton, who sang a duet with pop singer Justin Timberlake. They performed Stapleton's song "Tennessee Whiskey."

divorce – n. the ending of a marriage by a legal process

entertain – v. to perform for (an audience): to provide amusement for (someone) by singing, acting, etc.

defer – v. to choose to do (something) at a later time

dedicate – v. to officially make (something) a place for honoring or remembering a person, event, etc.

duet – n. a piece of music that is performed by two singers or musicians