Update Required To play the media you will need to either update your browser to a recent version or update your Flash plugin.
By Frank Beardsley and Kelly Jean Kelly
17 December, 2014

The end of the American Civil War came in April 1865. Union General Ulysses Grant had pushed Confederate General Robert E. Lee and his army away from the Confederate capital at Richmond, Virginia. 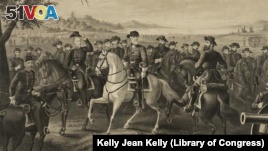 Robert E. Lee and his generals

Lee's army fled westward across Virginia. The tired, hungry soldiers tried to turn south, to reach safety in the Carolinas and prepare to fight again. But always, the Union army blocked the way.

Finally Lee's army found it could flee no farther. A Union force at Appomattox Station blocked any further movement west. Lee tried to break through the Union soldiers that surrounded his army. But he failed.

Lee sent General Grant a letter and asked to discuss the terms of surrender. On Sunday, August 9, the two men met at a home in the village of Appomattox Court House.

Lee rose as Grant walked into the house. Grant did not look like a great military leader, the chief of all Union armies. He was dressed simply. His clothes were the same as those worn by the lowest soldiers in his army. His boots and pants were covered with mud. His blue coat was dirty and wrinkled. But on its shoulders were the three gold stars of the Union's highest general.

Lee was dressed in his finest clothing. He wore a beautiful gray coat with a red sash tied around it. At his side, he carried an ivory and silver sword.

The two generals greeted each other and shook hands. Grant reminded Lee that they had met before, when they were both serving in the Mexican War.

The men exchanged light talk for several minutes. Finally, Lee raised the real reason for the meeting. He asked Grant to write the terms of surrender.

Grant sat at a nearby table. He wrote the agreement in the form of a letter. It said the Confederate army would give its weapons and public property to the Union army.

Grant did not ask for Lee's sword, or for any of the Confederate soldiers' private property. And, he said all the Southern soldiers would be permitted to return home in peace.

When he finished writing, Grant asked if Lee wished to propose any changes. Lee said many soldiers in his army owned their horses. He asked Grant if his men could keep them.

Grant said he understood many of the Confederate soldiers were farmers who needed the animals for planting. He agreed to tell his officers to let the Confederates take their horses and mules home.

In addition, Grant told the Union supply officer to feed the Confederate army. He ordered food for 25,000 men.

The terms of the surrender were generous. President Abraham Lincoln had discussed them earlier with General Grant. Lincoln said he wanted the Confederates to return to their homes safely and easily.

But the meeting between the two generals was filled with emotion. Witnesses to the event wrote that Lee's face showed pain and sorrow. As he left the house, he did not seem to see the Union officers who stood as a sign of their respect.

Grant lifted his hat in a final salute to Lee. Lee did the same. Then he got on his horse and rode slowly back to his army to tell them the news.

On the other side of the lines, Union soldiers began to celebrate. Artillerymen fired their guns to cheer the victory over Lee's army.

Grant heard the artillery booming and sent orders that it should stop. The rebels are our countrymen again, he said. We can best show our joy by refusing to celebrate their defeat.

reminded – v. made someone think about something; cause someone to remember

mules – n. animals whose parents are a horse and a donkey

sorrow – n. a feeling of sadness or grief caused especially by the loss of something

Now it's your turn. What do you think of the way that General Grant allowed the Confederates to surrender?