Update Required To play the media you will need to either update your browser to a recent version or update your Flash plugin.
By Bruce Alpert
17 March, 2016


A Pennsylvania man has admitted to stealing online nude photos and videos from female celebrities.

This information comes from Variety, which covers the entertainment industry. 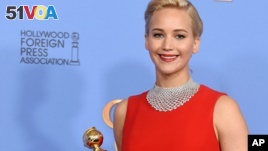 Jennifer Lawrence, seen with an award won at the 2016 Annual Golden Globe Awards, was one of the celebrities who had personal photos taken from her computer and later distributed online.

The FBI said Ryan Collins, 36, of Lancaster, Pennsylvania, admitted guilt this week to two criminal charges. Both charges are for illegal use of computers, the FBI said.

The FBI's announcement did not name the victims. But it said Collins obtained email and other private information from 122 people. Most are "female celebrities," the FBI said.

The case has been called "Celebgate."

The FBI said it has no evidence that Collins posted the nude photos and videos of female stars. Those images began appearing on the Internet in 2014.

The FBI said this is how Collins operated: He would send the celebrities emails that appeared to be from Apple and Google. The emails asked for sign in and password information.

Bowdich said the case shows the importance of not sharing personal information, such as email passwords. That goes for both stars and regular people, he said.

Apple and Google do not send emails asking for personal information, he said.

Federal prosecutors will recommend that Collins receive an 18-month prison sentence, according to a government press release.

Prosecutor Eileen Decker said Collin's victims have a right to make statements and attend all hearings in his case.

The charges were announced in Los Angeles, California, where many of the victims lived. But the FBI said the case will be heard by a court in Pennsylvania, near Collins' home.

Collins is married and the father of two children, according to website Lancasteronline.com. It said Collins worked in a sales job and as an art director, but recently showed interest in working as a chef.

We want to hear from you. Write to us in the Comments Section. Share your views on 51voa.com. Tell us what you do to keep your personal information and photos private.

nude - adj. having no clothes on

entertainment – adj. the act of amusing or entertaining people

accessing – v. to obtain something

password – n. a secret series of numbers or letters that allows you to use a computer system

download – v. the act of copying a computer file into another file or device

chef – n. someone who cooks at a restaurant