Update Required To play the media you will need to either update your browser to a recent version or update your Flash plugin.
By Caty Weaver
11 March, 2016

The movie had the largest opening weekend for a Disney animated film. People across the United States bought more than $75 million worth of tickets. 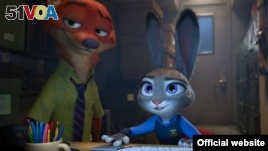 Experts say "Zootopia" is expected to stay strong this weekend. They predict it will make as much as $50 million dollars more. Already, the movie's worldwide box office total is more than $230 million.

"Zootopia" is a city of animals. The movie stars a bunny rabbit police officer and a fox criminal who team up to find a missing otter. He is among several animals that have suddenly disappeared from the city.

Critics have strongly praised "Zootopia" for its sharp humor and strong message. The film explores racism and other intolerance in its portrayal of relations between two kinds of animals in the city.

Jared Bush and Phil Johnston wrote "Zootopia." They told reporters that it started out as a spy movie set in several different animal worlds. But they found the mammal world especially interesting. So they changed the story.

Bush and Johnston said building the imaginary world took a lot of research. They both spoke about it to the website Inside the Magic.

Bush said they asked themselves, "What's this world like? What's the history of this world?" And then, he said, they went to the experts.

The writers spoke with people who study culture and group behavior, as well as those who study the psychology of individuals. And they talked with animal experts like zookeepers.

They learned that the natural world is made up of 90 percent prey animals and 10 percent predator animals.

The creators have noted that that diversity was not easy to produce in drawings. There are 64 species represented in the movie. There are multiple neighborhoods that represent the different environments of animal habitats.

Disney says "Zootopia" is its most complex animation yet. The extra effort is certainly paying off at the box office.

Caty Weaver wrote this story for Learning English. Her story was based on reports from VOANews. Kathleen Struck was the editor.

Do you have a favorite animated movie? Tell us about it! Post your thoughts in the comments section or on 51VOA.COM.

ticket - n. a piece of paper that allows you to see a show, participate in an event, travel on a vehicle, etc.

box office - n. used to describe how many tickets have been sold for a movie, play, etc.

con artist - n. a person who tricks other people in order to get their money

intolerance - n. the unwillingness to allow some people to have equality, freedom, or other social rights

portrayal - n. the act of showing or describing someone or something especially in a movie, painting, book, etc.

prejudice - n. an unfair feeling of dislike for a person or group because of race, sex, religion, etc.