Micronesia Among the Last Nations to Report COVID-19 Cases

Update Required To play the media you will need to either update your browser to a recent version or update your Flash plugin.
By Ashley Thompson
20 July 2022


Micronesia has likely become the final nation in the world with a population of more than 100,000 to experience an outbreak of COVID-19.

For more than two-and-a-half years, the Pacific island nation successfully avoided any outbreaks because of its physical isolation and border controls. People who flew into the country with the virus did not spread it because all new arrivals were required to quarantine.

But those defenses could not keep out the highly infectious omicron version of the virus forever. 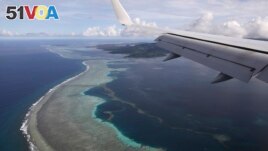 The aerial photo shows Pohnpei International Airport in Kolonia, Federated States of Micronesia, on Aug. 5, 2019. Micronesia has likely become the final nation in the world with a population of more than 100,000 to experience an outbreak of COVID-19. (Pool Photo via AP)

On Tuesday, Micronesia's government announced it knew of several cases across two of the nation's four states.

Officials said that in Kosrae State, 25 people were confirmed to have the virus after showing up at a local hospital. An additional 10 people from a family of 11 tested positive after a medical team visited them.

Officials said they had also found seven community cases in the state of Pohnpei. State leaders there have asked all locals to avoid public gatherings and to always wear masks.

The outbreak comes less than two weeks before Micronesia planned to end its quarantine restrictions and reopen its borders on August 1.

Last year, Micronesia became one of the few countries to put in place a COVID-19 vaccination requirement for all citizens who are eligible, or able, to get one. It threatened to withhold federal money from any individuals or business owners who did not follow the rules. As a result, it has had high vaccination rates.

Almost all nations in the world have now experienced COVID-19 outbreaks.

The Central Asian nation of Turkmenistan is the only other country with more than 100,000 people that has not reported any cases. Experts believe that there has likely been a major outbreak there that the secretive country has chosen to ignore.

There has also been mixed information from North Korea. In May, North Korea publicly admitted it had a COVID-19 outbreak. Since then, it has reported 4.8 million cases with people having high body temperatures. But state media identified only a small number of them as confirmed COVID-19 patients. North Korea has a lack of COVID-19 testing supplies.

isolation –n. the state of being separated from others

quarantine –v. to keep a person away from others to prevent a disease from spreading

positive –adj. showing the presence of something, such as a test for a disease