Update Required To play the media you will need to either update your browser to a recent version or update your Flash plugin.
By Bryan Lynn
11 December, 2018


A new study of American teachers suggests that there is a major shortage of computer science training in U.S. schools.

The study, released last week, was a joint effort between American technology company Microsoft and the international research company YouGov.

The study asked more than 500 K-12 educators across the U.S. a series of questions about classroom training for computer science and coding skills.

The study found that 88 percent of teachers agreed that computer science is very important to a person's future success in the workplace.

Microsoft noted a U.S. government prediction that by 2020, there will be 1.4 million computer science-related jobs available. However, U.S. college graduates are expected to take less than 33 percent of those jobs. The company also estimated that 10 years from now, 77 percent of jobs in the U.S. workforce will require technology-related skills. 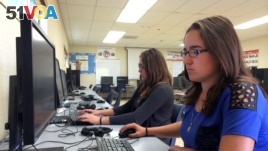 Microsoft says that currently, only about 40 percent of U.S. schools offer computer science classes that include computer programming. The company said that a shortage of teachers with the necessary skills is also a major concern.

In the study, 30 percent of teachers said they felt underqualified in their ability to help prepare students for a future in computer science or coding. Another 20 percent said they felt "overwhelmed" with that responsibility.

In addition, 25 percent of the teachers said computer science was not a subject their students are currently tested on. And about 20 percent said the subject was not taught in their classrooms at all.

The most common reason given by teachers for the low level of computer science training is a lack of government money to pay for such programs. About 30 percent blamed a lack of funding for why schools are not providing more technology-related learning.

The study found that 83 percent of teachers believe computer coding can build a student's overall creativity.

In addition, 80 percent of educators said they believe large technology companies like Microsoft, Google and Apple should be helping schools teach students computer science skills. About 75 percent of the teachers said they were concerned that the government is not doing enough to help teachers to build these skills.

Microsoft said it has expanded its cooperation with school systems in recent years to help improve computer science education.

One of its programs is called TEALS, or Technology Education and Literacy in Schools. This program places trained computer science professionals in high school classrooms in the U.S. and Canada. The goal is to train teachers in computer science-related subjects.

Microsoft announced last week it was providing $10 million to increase computer coding in schools. That money will go to an organization called Code.org. The not-for-profit group based in Seattle, Washington, supports expanding computer science learning in U.S. schools. The group says it especially seeks to increase interest in computer science and coding among females, minority groups and poor students.

The Microsoft study followed a recent announcement by Amazon. The big, online seller said that it was launching a new effort aimed at teaching more than 10 million students a year how to code.

Bryan Lynn wrote this story for VOA Learning English, based on reports from the Associated Press, Microsoft and Amazon. Mario Ritter Jr. was the editor.

K-12 – adj. relating to primary and secondary education. The U.S., Canada and other countries use the term to describe publicly supported school grades before the start of college

code – v. to change information into a set of letters, numbers or symbols that can be read by a computer

underqualified – adj. not having the necessary skills, qualities of experience to do something

overwhelmed – adj. completely overcome of overpowered by thoughts or feelings

funding –n. money provided for something

priority – n. something considered very important that should be dealt with before other things

professional – n. a person who does a job that requires special training or education