Update Required To play the media you will need to either update your browser to a recent version or update your Flash plugin.
By Pete Musto
17 November, 2018


Information technology, or IT, has entered into almost every part of modern life, and higher education is no exception.

Yet while many businesses and governments continue to invest in IT products and services, higher education in the United States seems to be following a different path.

Research suggests that many U.S. colleges and universities have limited their spending on IT. Some experts argue this is not only harming the schools and their programs, but also the experiences of their students.

A group called the Campus Computing Project studies how American higher education uses information technology. Since 1990, it has published a yearly report on technology-related issues on college and university campuses.

In October, the group released its latest findings, after contacting IT leaders from 242 public and private schools across the country. It asked those responsible for operating campus IT services about how much school administrators supported their work. Their answers were less than favorable.

Many of the IT leaders noted that their departments have faced serious cuts to their budgets in recent years. And about two-thirds said their schools have done little to provide them with the financial resources necessary to recover from those cuts.

Over 79 percent of those leaders questioned said budget cuts made it difficult for them to keep their employees from seeking jobs elsewhere.

A University of Miami student studies the daily lesson plan on his computer during a Spanish language class in Coral Gables, Florida.

The importance of campus IT

Kenneth Green is the founding director of the Campus Computing Project. He says that information technology is linked to higher education in more ways than most people understand. For example, before students even think about attending a college or university, they often research the school by visiting its website.

But that is only a small part of IT's usefulness to a school, Green said. He added that more and more professors are using technology to improve their educational materials and connect with other educators. Schools use online databases to collect information about their students. And students use the internet to do research, register for classes, and even pay for their college education.

Green suggested that a big part of the problem is budget issues that are out of the control of school officials. This is especially true at public education institutions, which depend on money from the government. He noted that during the recession of 2008, most state governments reduced their spending on higher education.

The U.S. economy has greatly improved since then, but an increase in financial support for higher education has not followed, he added.

"We have this ... exploding demand ... and not enough money," Green told VOA. "At a college or university, you have ... competing groups saying, ‘Over here, over here! We need money to do this.' And ... leadership has to make some hard choices."

Green said it is not as if school officials undervalue the importance of strong, modern IT systems. But it is difficult to keep IT systems operating if the best workers feel they can find better jobs elsewhere. 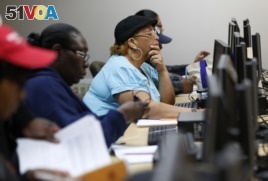 Where is the money really going?

However, Adam McQuinn argues that if schools really understood the importance of IT, they would not choose to spend money in unnecessary ways.

McQuinn is with the Information Technology Innovation Foundation, a non-profit research group not involved in the Campus Computing Project study. He notes the study identifies issues that have been developing in higher education for years. But instead of dealing with those issues, many schools have increased spending in areas other than IT.

For example, a 2017 George Mason University study found that colleges and universities added a large number of administrative employees between 2001 and 2011. That number increased 50 percent faster than the number of classroom teachers added during the period.

McQuinn said that many of these administrative positions do not directly relate to student learning or the success of students. And they come at the sacrifice of important services, such as IT.

Instead, colleges and universities should accept that investment in IT products and services can actually reduce operating costs, he said. That is because technology can remove the need for workers to do things like record keeping, preparing documents and requesting money for research.

"One of the major problems that we see here is that different institutions are treating IT as a cost center rather than a strategic investment that can pay off," McQuinn said.

He added that some schools have tried to spread the cost of things like IT by increasing other costs for students. But with the cost of U.S. higher education rising, schools should be trying to reduce financial barriers, he said. And there should be more efforts like a recent Department of Education program that pays for improvements to IT security training systems at community colleges.

The Campus Computing Project's Kenneth Green said that schools need to get a better picture of how well their IT services are operating. His study found that only about 20 percent of the 242 colleges and universities have a process of examining the benefits of technology on their campuses.

"We talk about the power ... of technology," Green said. "But it's still the case that a lot of the decision making is done with opinion or epiphany. We don't do a good job, at least in the United States, about gathering evidence and doing research about our investments in technology."

We want to hear from you. How important do you think technology is in higher education? Write to us in the Comments Section or on 51VOA.COM.

strategic – adj. useful or important in achieving a plan

epiphany – n. a moment in which you suddenly see or understand something in a new or very clear way