Update Required To play the media you will need to either update your browser to a recent version or update your Flash plugin.
By Pete Musto
24 November, 2018


Mental health is no small issue at colleges or universities around the world, including the United States.

The youngest students at U.S. colleges are just out of high school. Most first-year college students are just 17 or 18 years old; others are usually between the ages of 19 and 24. For many, this is the first time living away from home. In some cases, they are far from friends and family members.

College students quickly learn that they have a lot of responsibilities, some of which they alone must face. They will have hours of intense study, as well as more critical needs, like eating and sleeping well. Some students need to find a job and work to help pay for their education.

On top of this, students are meeting new people, making new friends and establishing their identities as independent adults.

With all of these demands coming together at the same time, it is no surprise that many students struggle with mental health issues. Feelings of worry, nervousness, emotional stress and depression are just some of the issues they may face.

Most U.S. colleges and universities provide mental health services and have trained specialists to help their students. But Nathaan Demers notes that such resources are not always enough of a solution.

Demers is a trained clinical psychologist. He is also vice president and director of clinical programs for a website called You at College (YOU@College).

The site is a joint project of Grit Digital Health, a Colorado-based business, and Colorado State University, in Fort Collins, Colorado. It aims to create solutions for mental health issues in ways that go beyond traditional methods. 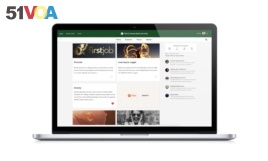 A sample image of the YOU@College website on a laptop computer.

In 2013, several Colorado State students ended their own lives. The university's administration admitted it was facing serious problems with student mental health, and needed a solution, Demers says.

It was then that administrators reached out to a former CSU student who was the head of a company called Cactus Communications. A few years earlier, the company and Grit Digital Health set up an internet-based tool to help adult men learn about mental health and seek support services. The website used humor to make treatment of mental health issues feel less like a duty and more like an enjoyable activity.

Demers notes the Colorado State administrators wanted something like that. Yet they also understood that college students have their own special needs. College students are often very busy and have little free time to spend doing something that feels like work, Demers says. They also usually do not see mental health issues for what they are.

"They're stressed out of their minds," he told VOA. "They're not keeping up in the classroom, so they're coping with drugs and alcohol. They're not sleeping well, missing class because of it. But you know (they say), ‘I don't have a behavioral health disorder. Someone else should be going to the counseling center. That's not me.'"

So when the university and Grit Digital Health began working on YOU@College, they tried to make it as appealing to college-aged people as possible, Demers says. Instead of making an online tool dealing mainly with mental health, they organized the website around three ideas: succeed, thrive and matter.

‘Succeed' relates to issues of success, both in education and one's career. ‘Thrive' relates more to issues of physical and mental health. And ‘matter' relates to finding a purpose and connecting to others at one's college or university.

When a student first uses YOU@College, they are given a short test that examines the student's personal qualities in all three areas. Based on the results, the website suggests news stories and videos to students. It also has links to other materials that offer advice on how to deal with issues they may struggle with.

Demers notes all of the site's material is based on the latest mental health studies, takes into consideration current events, and is presented in a clear and enjoyable way. However, most important of all, he argues, it makes suggestions for school-based resources students might use to deal with their problems.

Sam Jennings says information like this is extremely important, especially for first-time students. Jennings is the dean of students for South Dakota State University in Brookings, South Dakota.

After YOU@College was launched at Colorado State in 2016, about 20 other schools expressed interest in the website. They have since agreed to work with Grit Digital Health on developing it for their students. South Dakota State started working with the company earlier this year.

Jennings says that colleges and universities try their best to inform students about all the different support services they have to offer. But it might not always be clear to students exactly what kind of support they need for a given problem. And first-year students are often given more information about their new school, community and surroundings upon arrival than they know what to do with.

"There's no way they're going to keep all that front of mind when the need comes up six weeks down the road...when...they are in crisis," says Jennings.

He adds that he has researched similar online tools before. But none of them offer such direct advice for which resources students might find helpful as YOU@College. This includes meeting times for special student support groups, and the location of counseling centers and names of the people who work there.

All of this makes it that much easier for students to seek help sooner, before their problems build to a point beyond their control. To date, YOU@College has had over 58,000 users at Colorado State alone.

Pushing students towards taking action earlier is especially important considering how much more demand there is for support services, says Lynn Linde. She heads the Center for Counseling Practice, Policy and Research at the American Counseling Association.

Linde notes many young people are highly informed about the problems facing the world today. And as a result, some feel less safe and more worried than earlier generations. So more of them seek out mental health support services, and many colleges and universities struggle to meet the increased demand.

Seeking help sooner helps ease the pressure on college counselors when issues begin to increase in severity, she says. And having tools available online is especially helpful for the current generation of college students, as they grew up using personal devices for almost everything.

However, Linde warns that over-dependence on technology can lead to other problems. And the rules and laws governing traditional counseling services do not yet exist for more modern mental health resources.

Also, websites and other online tools will never does as much good as meeting with a counselor in person.

"They are never going to replace...the relationship that develops between the counselor and...the student or the group," said Linde. "They go on this journey together."

We want to hear from you. What do you think are the best resources for helping college and university students deal with mental health issues? Write to us in the Comments Section or on 51VOA.COM.

nervousness – n. a state of having or showing feelings of being worried and afraid about what might happen

stress – n. a state of mental tension and worry caused by problems in your life or work

clinical – adj. of or relating to a place where medical treatment is given

psychologist – n. a scientist who specializes in the study and treatment of the mind and behavior

beyond – prep. more than something

coping – v. dealing with problems and difficult situations and trying to come up with solutions

counseling – n. advice and support that is given to people to help them deal with problems and make important decisions

dean – n. a person whose job is to give advice to the students in a college or high school and to make sure that they obey the school's rules