Update Required To play the media you will need to either update your browser to a recent version or update your Flash plugin.
By John Russell
12 April, 2019


Americans are increasingly feeding their dogs and cats fresh foods.

Most Americans feed their pets with kibble – a kind of food ground into small pieces. But, more American pets are eating fresh food, like chicken, sweet potatoes and spinach.

Sales of fresh pet food in grocery stores and pet stores grew to about $546 million in 2018. That is an increase of about 70 percent from 2015. That information comes from Nielsen, a company that researches what the public buys and uses. 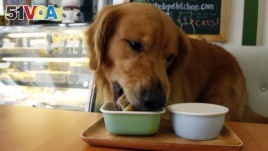 Even with the big increase, fresh food sales still make up a small part of the $25 billion that Americans spend on pet food each year.

Supporters of fresh food diets for pets say these foods keep their nutrients better than canned or dried foods. They also say fresh food diets are similar to the pets' ancestral diets and improve their health.

In America, pet food trends have followed human ones. When gravy, a sauce made from the juices of cooked meat, was popular in the 1950s, Gravy Train dog food appeared. In the 1980s, Fancy Feast cat food showed a growing consumer interest in gourmet food.

Mintel is a company that advises businesses. It said young buyers are fueling the sales increase. They are more likely to choose pet foods that they consider to be safer and more natural.

Amy Zalneraitis is the part-owner of We Feed Raw, a raw food meal plan service for pets based in the northeastern state of Maine.

She said, "Just as people have become skeptical of highly processed foods for themselves, they're looking critically at their pets' foods as well." She added: "They think: How could something with a shelf life of over [a] year be better than real, fresh food?"

But some animal health experts question this way of thinking. They say established pet food companies, like Royal Canin, have researched their food for many years.

The U.S. Food and Drug Administration says that raw pet food has a high risk of bacterial contamination. The agency is also investigating a link between grain-free diets that contain peas, lentils and potatoes and elevated levels of heart disease in dogs.

Lindsey Bullen is a pet nutrition specialist with the Veterinary Specialist Hospital of the Carolinas in Durham, North Carolina.

She said pets need many kinds of important nutrients. If those levels of needed nutrients "are too high or too low," she added, "it can cause significant problems for that pet that the client might not see for months or years to come."

Seven years ago, Deb Colgan saw that her husband was feeding raw meat to their two dogs. At first, she did not like the idea, but changed her mind after researching it.

She and her husband started buying raw meat and bones from the grocery store. She also talked with a veterinarian and added supplements like vitamin E, salmon oil and probiotics, among others.

One of her dogs stopped vomiting regularly and gained weight. The other stopped getting ear and urinary tract infections. Those dogs eventually died, but the Colgans have continued the diet with two new dogs.

"It's very much a relief they are so healthy, and we do believe it's because how they eat," said Colgan. "I can't imagine us ever going back to commercial [dog food]."

Dee-Ann Durbin reported on this story for the Associated Press. John Russell adapted it for Learning English. Mario Ritter was the editor.

skeptical – adj. having or expressing doubt about something (such as a claim or statement)

shelf life – n. the length of time that food may be stored and still be good to eat — usually singular

contamination – n. the process of making something dangerous, dirty, or impure by adding something harmful or undesirable to it

trend –n. a general direction of change : a way of behaving, proceeding, etc., that is developing and becoming more common

client –n. a person who pays a professional person or organization for services

vomit –v. to have the food, liquid, etc., that is in your stomach come out through your mouth because you are sick