Secret Service Continues to Guard US President While its Leadership Changes

Update Required To play the media you will need to either update your browser to a recent version or update your Flash plugin.
By Susan Shand
09 April, 2019


The Trump administration announced this week that the head of the United States Secret Service is being replaced. The Secret Service says Randolph "Tex" Alles will leave office in May.

The move appears to be part of leadership changes at several agencies within the Department of Homeland Security. President Donald Trump has chosen James Murray, a career Secret Service official, to lead the agency.

The Secret Service protects the president and vice president, their family members and former presidents and their wives. It also protects foreign leaders during visits to the United States and major candidates in U.S. presidential campaigns. 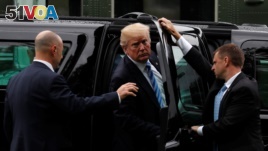 In recent years, a series of scandals have damaged the image of the Secret Service. Some involved wrongdoing by agents while traveling with the president.

Protecting the president involves more than being willing to step into the path of gunfire. As part of their training, all of the several thousand Secret Service agents learn everything from operating firearms to emergency first aid. They also have to learn how to drive.

Agents are trained in the art of defensive driving with a single goal: get the protected individual out of the area and moved to a safe place, explains Thomas Murach. He works as Secret Service assistant to the special agent-in-charge.

One defensive driving move agents must learn is the J-turn, a move that will be familiar to lovers of action movies. The driver makes the vehicle turn in a half-circle, around 180 degrees, and then escapes.

However, to drive the president or vice-president requires additional training. Only about 60 percent pass the class, known as the Protective Operations Driving Course.

"If an agent doesn't pass the advanced course, they would continue normal duty and can try again at a later date," says Julia McMurray, a Secret Service Public Affairs Specialist.

Once agents pass, they are permitted to drive the 9,000 kilogram presidential vehicle, which is called Cadillac One or The Beast.

Agents may also perhaps drive one of two buses known as Ground Force One. The million dollar black buses were last used in 2012 during then-President Barack Obama's re-election campaign. Both are used by the presidential candidates of the two main political parties.

It's almost like 400 kilograms, explained Secret Service Technical Officer Lloyd Llamas. "They make you do things that you can't imagine that you could possibly do with that," he added.

The Secret Service believes all this training will prevent a repeat of the Secret Service's worst day on November 22, 1963. That was when President John F. Kennedy was shot and killed in the back seat of a car during a visit to Dallas, Texas.

As a result, formal training for Secret Service drivers began in 1970. For those in the Secret Service chosen to operate a presidential vehicle, there is a constant drive to guarantee the safety of its important passengers.

VOA's Steve Herman and the Associated Press reported this story. Susan Shand adapted it for VOA Learning English. George Grow was the editor.