Update Required To play the media you will need to either update your browser to a recent version or update your Flash plugin.
By Susan Shand
11 April, 2019

Assange had taken refuge in the embassy in 2012. He went there to avoid being sent to Sweden, where he was wanted for questioning as part of a sexual assault investigation.

Sweden suspended the investigation in 2017, but Assange remained at the embassy over fears he might be sent to the United States. The U.S. Department of Justice wants him in connection with WikiLeaks' publication of secret government documents. 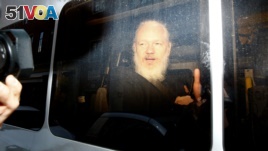 WikiLeaks founder Julian Assange is seen in a police van, after he was arrested by British police, in London, Britain April 11, 2019. (REUTERS/Henry Nicholls)

British police said on Thursday they were invited to the embassy by Ecuador's ambassador after the Ecuadorian government cancelled its offer of asylum to Assange.

A short time later, the U.S. Justice Department announced it was bringing charges against Assange. It accuses him of conspiring to break into U.S. government computers to read secret documents and communications.

The Justice Department asked Britain to send him to the United States for trial. His next appearance in a British court is set for May 2.

The history of WikiLeaks

WikiLeaks, a non-profit website, was the creation of Julian Assange. Its goal is to get and publish secret information and news leaks provided by individuals who wish to remain anonymous.

The website angered U.S. officials by publishing hundreds of thousands of secret messages from diplomats and other officials.

The U.S. government claims that in March 2010, Assange worked with an army private, Chelsea Manning, to break into Department of Defense computers. Those computers are connected to the Secret Internet Protocol Network, a system used for secret documents and communications. Manning was an intelligence analyst who had permission to use the computers.

The charge can lead to up to five years in prison.

Assange will have the right to argue against the U.S. extradition request in British courts. He will most likely argue that the case is political and not criminal.

Assange is not accused of spying, something many supporters of press freedom are pleased to hear.

Freedom of the press

Assange has always said that WikiLeaks is a press organization. He says it works for government openness.

In 2013, Assange's organization became involved with Edward Snowden, who once worked for the U.S. government. Snowden released National Security Agency documents and now lives in exile in Russia.

In 2016, WikiLeaks released thousands of emails about the election campaign of presidential candidate Hillary Clinton. Those emails were taken from computers operated by the Democratic National Committee. U.S. investigators have said that Russian agents broke into the computer systems and gave the emails to WikiLeaks.

Assange says he did not get the emails from Russia.

The Justice Department charge against Assange is not related to the U.S. investigation into Russian interference in the 2016 elections. The investigation did not lead to charges against Assange. It also did not find evidence that Donald Trump's presidential election campaign worked with Russian agents on the break in.

During the election campaign, Trump praised WikiLeaks for releasing the damaging Democratic emails.

The Associated Press and the Reuters News Agency reported this story. Susan Shand adapted this story for VOA Learning English. George Grow was the editor.

conspire – v. to plan an act with other people

extradition – n. to be sent from one country to another

journalist – n. one who reports the news