Update Required To play the media you will need to either update your browser to a recent version or update your Flash plugin.
By Bryan Lynn
25 September, 2018


A growing number of American states are requiring schools to teach students how to judge information on the internet and social media.

Media literacy, also known as news literacy, is the ability to use critical thinking skills to recognize differences between real and "fake" news. Fake news are stories that appear to be news, but are in fact false or misleading.

The new law requires California's Department of Education to provide materials related to media literacy on its website. The materials are designed to inform teachers and provide tools for them to teach the subject.

California State Senator Bill Dodd proposed the bill, which became law. He said the goal is to give students a set of effective tools to "empower them to make informed decisions." He added that news literacy is important for students and society to help "safeguard the future of democracy." 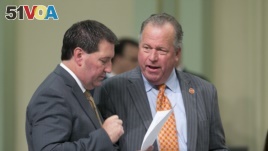 Dodd told VOA that his media literacy efforts were based on a Stanford University study from 2016. It found that 80 percent of U.S. middle school students failed to recognize an advertisement that looked like a real news story. The ad was even identified as "sponsored content."

The researchers also found that high school students had trouble telling the difference between a real Facebook news website and a fake news site.

The study called for more efforts to help students recognize false information on the internet and social media services. It said that young people also need the skills to find out where news stories come from, and to be able to judge the trustworthiness of sources and writers.

Dodd said he wanted his bill to go even further, and to include the creation of full media literacy training in all classrooms. But he said there was not enough legislative support for providing the money needed for such an effort. Dodd did say he thinks that once the new teaching materials become available, lawmakers will be more willing to expand the program.

Other states have also passed legislation to bring news literacy education to the classroom. Others are considering new measures.

The bill passed in California is similar to one approved last year in Washington State. It created a web-based system of materials for teachers. The Washington law also required education officials to report on how they plan to add media literacy education to local schools.

A bill was under consideration last year in New Mexico. It called for a new "life skills" requirement for those completing their education. The bill would require students to study media literacy as part of a class covering life skills in order to graduate. The state's House of Representatives has yet to pass the measure.

A proposal before Hawaii's legislature would develop a statewide plan to teach media literacy skills at all levels in public schools. That bill is still under consideration.

Carolyn Edy is a professor of communication at Appalachian State University in North Carolina. She told VOA she has seen a clear change in her students' abilities to judge news sources as they have grown on the internet and across social media.

Edy said that when students used to read printed newspapers, it was easier for them to recognize fact from opinion. Now, she finds it necessary to teach students how to fully examine websites.

"It's a big problem for a lot of people," she said.

One of Edy's goals is to teach students how to research the news organizations responsible for the stories they are reading. One way to do this is for students to ask a series of questions.

One example she gives is, "What is the overall mission of the organization?" Another would be, "Do they use professional news gathering and reporting methods?"

Edy says young people also need to judge whether news organizations identify any possible conflicts of interest. Another question to ask is, "What do they do when they get a story wrong?" Responsible and trustworthy news organizations issue corrections if something is falsely reported, she said.

Edy added that one good thing to come out of the rise of misinformation and fake news is that it has made many people seek out good reporting.

"I've had some of the most engaged students I've ever had. And that's really exciting," she said.

Marissa Melton reported on this story for VOA News. Bryan Lynn adapted her report for Learning English, along with additional material from online sources. George Grow was the editor.

safeguard – v. to protect something from harm

sponsored – adj. supported, given help from a sponsor

content – n. something contained; substance; the issue under consideration

graduate – v. to officially finish a school or university education

mission – n. the goal of a project or activity

engaged – adj. to have attention focused on a certain subject or task