Update Required To play the media you will need to either update your browser to a recent version or update your Flash plugin.
By Mario Ritter
21 September, 2017


Hundreds of thousands of ethnic Rohingya people have been forced out of western Myanmar in what the United Nations is comparing to "ethnic cleansing."

Officials of Myanmar including State Councilor Aung San Suu Kyi say the problem is complex and will require time to work out. Officials say Muslim terrorists are responsible for destruction of villages and displacement of people.

Who are the Rohingya?

The Muslim Rohingya people are one of the many ethnic minorities in Myanmar, also known as Burma, which is a Buddhist majority country. Most have lived in Myanmar's western Rakhine state.

The government considers the Rohingya migrants from Bangladesh who are seeking better economic conditions. They are not recognized as citizens although many can show that their families have been in the country for generations.

This is not the first time the Rohingya have fled the area. 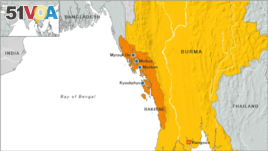 Hundreds of thousands left in 1978 and again in the early 1990s, fleeing military and government oppression. In 2012, another 100,000 fled by boat as Myanmar was transitioning from a half-century of military dictatorship to democracy.

The violence in Rakhine state has continued since late August when Rohingya militants attacked several police and army positions there.

However, military operations to answer the attacks have killed hundreds of Rohingya and many of their villages have been burned.

It is estimated that more than 300,000 Rohingya have fled to neighboring Bangladesh. Thousands more remain in Myanmar where they are in need of food and aid.

Not clear what is happening in Rakhine state

The United Nations has described the treatment of the Rohingya as a "textbook example of ethnic cleansing."

Recent efforts to bring aid to the area have faced setbacks.

In one incident, nine aid workers transporting humanitarian assistance died when their truck crashed into a ditch.

In another incident, a mob of about 300 protesters blocked a shipment of humanitarian aid in the port of Sittwe, the capital of Rakhine state.

The protestors attacked a boat that was being prepared to take 50 tons of supplies including food, water and mosquito nets from the International Red Cross.

The aid was to be sent to Rohingya in the northern part of Rakhine.

Some Buddhist religious leaders urged calm. But, the mob began throwing stones and gasoline bombs at police who fired warning shots in the air. Eight people were detained during the unrest.

Reporters and rights activists say they cannot find out what is happening in Myanmar's western Rakhine state.

Recently, the government permitted a group of reporters to visit Hindu villagers who said they were attacked by Muslim terrorists. However, when the reporters investigated, they found that two of those identified as victims had also been shown as "Bengali terrorists" on social media sites.

Phil Robertson is the Asia Division deputy director for the activist group Human Rights Watch. He said the government "brings out these fake photos or these fake narratives and then they attack the human rights groups like us saying why don't you guys investigate."

Robertson added, "Let us in. Let us go where we want to go and do what we want to find the truth."

The crisis in western Myanmar has gained international criticism

Myanmar's leader Aung San Suu Kyi has also faced international criticism for not speaking out strongly about the actions of Myanmar's military.

She has called on the military to avoid harming innocent civilians. However, she said there is no simple answer to the problem.

"Building up trust and harmony between two communities that have in many parts of that region been hostile to one another is not done easily," she said.

Richard Green and Steve Sanford reported this story for VOA News. Mario Ritter adapted it for VOA Learning English with additional material from Victor Beattie. Hai Do was the editor.

Narratives –n. a story that is told or written