Update Required To play the media you will need to either update your browser to a recent version or update your Flash plugin.
By Faith Pirlo
30 December 2022


Hello! This week on Ask a Teacher, we will answer a question about the difference between "nation" and "country." 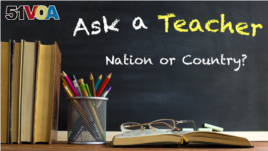 Ask a Teacher: Nation or Country?

Could you please help and explain what the difference is in usage between "nation" and "country?"

This is a great question. Often these words are used as synonyms, but there are differences. Let's look at how we use these words and find some examples to help us understand.

A "country" is an organized political unit. We often describe "countries" as "states," especially when talking about politics. Joshua Keating, a former editor for the website Foreign Policy says there are several things that are needed to become a country.

A country needs territory or land. Next, people living there must live there permanently. Then the international community must recognize the boundaries or borders of the country.

Next, the country must have full sovereignty or the freedom of rule and be recognized by other countries. Finally, a country is ruled by a government or political body.

Here are some examples of how to use "country" in a sentence.

There are no countries in Antarctica, but some countries like Chile and New Zealand have claimed areas of it.

I have been to several countries in Europe including Romania, Czechia, Estonia and Finland.

Even though The United States is made up of smaller units called "states," they are not sovereign countries and are not internationally recognized as such.

California is a state and has the world's 4th largest economy, but it is not a country.

We often use "country" and "state" as synonyms, especially to differentiate the other meaning of "country" as a place outside of a city that has fields, farmland, trees, or villages.

Regina enjoys going to the country on the weekends to visit her family's farm in West Virginia.

And now let's move onto "nation."

"Nation" has two different meanings. Firstly, a "nation" can describe the same thing as the word "country" or "state." Our VOA Word Book describes a "nation" as a "country" together with its political and social systems. Let's look at an example.

There are 193 nations that make up the international organization called The United Nations.

The nation of Argentina recently won the FIFA World Cup.

"Nation" also has another meaning. It is the people of an area who are connected by a common culture or identity.

Sometimes a "country" or "state" is represented by one "nation," called a "nation-state."

Japan, Finland, and even the United States are considered nation-states.

Not all "nations" of people have their own "country" or border of their land that is recognized internationally.

Examples of "nations" of people without their own "country" include: The Kurdish people and native or indigenous people like Native Americans.

The Kurdish nation lives throughout a region called Kurdistan, which is spread throughout five countries. Kurds have a common language and culture.

First Nations people are an indigenous nation group in Canada.

synonyms – n. a word that is similar in meaning to another word

sovereignty – n. a country's independent power and the right to govern itself

indigenous – adj. produced, living or existing in a certain place or environment; native to a place