Update Required To play the media you will need to either update your browser to a recent version or update your Flash plugin.
By Faith Pirlo
18 November 2022


Hello! This week on Ask a Teacher, we will answer a question about if nouns can become verbs. 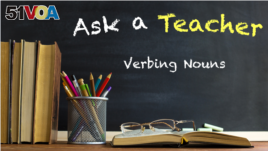 Can any nouns be a verb?

When it's raining, I umbrella her.

Thanks for writing us, Johnny. This is a great question.

The answer may surprise you.

Yes, any noun can be made into a verb in English. It is one of the most interesting things about English. The process is called "verbing" or making a verb from a noun.

"To fan" something or someone is an accepted verb, which means that many people use it, and you can find it in the dictionary. This verb means to cool by using a device, a like fan, to create air.

So, you can totally fan your mom.

You can also "fan" the flames of a fire to make it stronger.

But just because a noun can be made into a verb, does not mean that it always works or is accepted into the language.

We do not yet have "to umbrella" as a verb in our language. But who knows, if you keep using it enough, you might just "verb" it!

We often see "verbing" on the internet, especially on social media. For example, the noun "friend" is now commonly used as a verb.

We also "google" to find information. And since more people study and work from home during the pandemic, we now "zoom" or "skype" each other.

But this process of creating verbs from nouns is not new. We have been verbing for centuries!

Some common nouns turning into verbs include "pencil, table, butter, and voice. For example,

I will pencil you in for next Friday!

"To pencil" means to set up a meeting or add someone to a list by writing their name down.

Since we are running out of time, let's table this discussion for next week's meeting.

"To table" something is to delay the discussion until a future time.

I butter my bread every morning.

"To butter" means to apply butter to bread.

And lastly, "to voice" has two meanings. The first is to tell someone your thoughts, feelings, or opinions about something.

She voiced her opposition to the new community plan.

The second meaning of voice is to make sounds with your voice, like speaking. For example,

At Learning English, we always voice our stories after we write them.

If you are interested in learning how words are created and accepted into the language, there is an interesting TED Talk by Erin McKean, who writes dictionaries.

umbrella — n. a device that is used for protection from the rain and sun

butter — n. a solid yellow substance made from milk or cream that is spread on food or used in cooking

flame — n. the visible part of a fire