Update Required To play the media you will need to either update your browser to a recent version or update your Flash plugin.
By Bryan Lynn
08 December 2020


China and Nepal have announced a new official height for Mount Everest, the world's highest mountain.

The mountain runs along the borders of Nepal and China. The new height is a bit more than Nepal's past measurement and about four meters higher than China's.

The result was announced during an online video event led by the foreign ministers of China and Nepal. The two countries agreed to the official height after expert teams completed new surveys of the mountain in 2019 and 2020.

There had been debate over the actual height of the peak and concern that it might have shrunk after a major earthquake in 2015. The quake killed 9,000 people and damaged about 1 million structures in Nepal. It also caused an avalanche on Everest that killed 19 people. 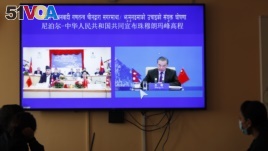 Everest's height was first declared as 8,842 meters by a British team around 1856. But the most widely accepted height has been 8,848 meters, which was decided by the Survey of India in 1954.

In 1999, a National Geographic Society team used GPS technology to come up with a height of 8,850 meters. But in 2005, a Chinese team reported a height of 8,844.43 meters because it did not include the mountain's snow top.

A Nepal government team of climbers and surveyors climbed Everest in May 2019. The team used GPS and satellite equipment to measure the peak and snow depth at the top of the mountain.

Chinese President Xi Jinping visited Nepal later that year. The leaders of the two countries decided they should agree on an official height.

A survey team from China then carried out measurements in the spring of 2020, when all other climbing activities had stopped because of the coronavirus crisis.

Nepal's climbing community welcomed the end of disputes over Everest's height. "This is a milestone in mountaineering history which will finally end the debate over the height and now the world will have one number," said Santa Bir Lama. He is president of the Nepal Mountaineering Association.

The first people to officially climb Everest were New Zealand's Sir Edmund Hillary and Nepal's Sherpa Tenzing Norgay. They reached the peak in May of 1953.

Since then, the mountain has been climbed 10,184 times by 5,789 people. Those numbers come from the Himalayan Database, which records climbing activity.

At least 311 people have died attempting to reach Everest's peak.

The Associated Press and Reuters reported on this story. Bryan Lynn adapted the reports for Learning English. Ashley Thompson was the editor.

symbol – n. a sign or object used to represent something

survey – n. an examination of the structure of something

avalanche – n. a large amount of snow that falls down the side of a mountain

GPS – n. (abbreviation for global positioning system) - a radio system that uses signals from satellites to tell you where you are and to give you directions to other places