Update Required To play the media you will need to either update your browser to a recent version or update your Flash plugin.
By Bryan Lynn
05 December 2020


Singapore's government has approved the sale of a laboratory-grown chicken meat. The American company that invented the product, Eat Just, says it is the first time lab-grown meat has received such approval anywhere in the world.

Lab-grown meat – also called clean or cultured meat – is created from animal cells in a laboratory. The product is made without harming animals. The cells grow directly into the meat, outside of any animal.

The Eat Just product is to be sold as small pieces, called nuggets. The product is set to launch at a Singapore restaurant "in the very near term," the company's CEO Josh Tetrick told Reuters news agency. 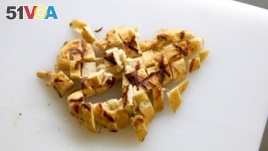 Singapore is an island city-state of 5.7 million people.

Demand for alternatives to animal meat is rising across the world because of public concerns about health, animal welfare and the environment. Plant-based products - popularized by companies like Beyond Meat, Impossible Foods and Quorn - are selling in a growing number of stores and restaurants.

But the development of lab-grown meat has been much slower than that of plant-based versions. The main reason for the delay is money. Lab-grown meat costs a lot more to produce.

Tetrick said the San Francisco-based company is also seeking approvals from U.S. government agencies. But he added that Singapore was a "good bit" ahead of the United States.

The Singapore Food Agency said it examined data from processing, manufacturing control and safety testing before approving Eat Just sales. Tetrick said it is likely that the U.S. and countries in Europe and elsewhere will examine Singapore's approval system and will attempt to create a similar process.

Eat Just said it will manufacture the product in Singapore. The company also plans to start making a plant-based egg substitute there that it is already selling in the United States.

Eat Just was founded in 2011 and has raised more than $300 million, Tetrick said. The company is valued at around $1.2 billion.

Worldwide, more than 24 companies are testing lab-grown fish, cow and chicken meat. They are hoping to break into a new part of the alternative meat market. Financial experts at Barclays Bank have estimated the market could be worth up to $140 billion by 2029.

Competitors in the market have also been able to raise large amounts of money and win support from well-known investors.

In Singapore, Shiok Meats aims to become the first company to sell lab-grown shrimp. The company is backed by Henry Soesanto of the Philippines' Monde Nissin Corporation, which also owns Quorn.

Reuters reported on this story. Bryan Lynn adapted the report for VOA Learning English. Caty Weaver was the editor.

alternative – n. one or more things that you can choose between