Update Required To play the media you will need to either update your browser to a recent version or update your Flash plugin.
By VOA
18 September, 2013

Hello, and welcome back for another edition of As It Is. I'm Jim Tedder in Washington. Today, we travel to Nigeria to learn about some young people who want to punish members of a famous militant group. But some wonder if this civilian organization will someday become yet another problem for the Nigerian government.

Then we'll hear from some law experts who think that the process of becoming a lawyer takes too long, and costs too much. Is it possible to become a good lawyer without going to law school for 3 years? Stay with us for As It Is, a way to learn English while hearing about your world!


Nigeria's northeastern Borno state is home to the Islamist militant group, Boko Haram. Hundreds of young men there have formed a civilian group to resist Boko Haram. These civilians work actively with the military to find Boko Haram militants. The civilians use methods outside the law to punish what they consider wrongdoing. But now their members have become targets.

At least 55 members of a civilian defense group in Borno State have been killed by people who appear to be Boko Haram militants. The killings took place in a series of attacks, beginning in August.

The civilian policing group is called the Civilian JTF, the Civilian Task Force. It is similar to the Nigerian military's JTF, the Joint Task Force. The government military force has tried to control the Islamist rebellion in northern Nigeria that has continued since 2009.

Baba Garba Chajo helped form the Civilian JTF this June. He says the group's job is to help the military. And he says that includes searching for and arresting militants.

"In the past we were at the receiving end of the Boko Haram. But now we are the ones sending them on the run. We no longer fear Boko Haram because we have conquered our fears. And we have all sworn by the holy Quran to justly pursue our duties without recourse to worldly gains."

But there have been problems. Mr. Chajo said they had to get soldiers to shoot several members of their group. He said that in one village, Civilian JTF members were robbing and attacking people. He described their actions as "worse than Boko Haram."

Baba Garba Chajo once worked as a mechanic. But he now spends his time looking for members of Boko Haram as he drives the streets of Maiduguri in Borno State. Many local people are tired of the rebellion. They praise the efforts of the Civilian JTF.

The military supports the Civilian JTF and provides them with protection. The idea is that local people know the communities and are better able to find militants. But the military has not given any guns to Civilian JTF members.

Colonel Musa described the militants as, in his words, not happy. He said they are no longer able to move freely. But others are not so sure. The military has cut off cellphone communication in much of the northeast and blocked the battle areas. Progress is hard to measure.

And there are concerns that supporting the civilian group will lead to more big problems. Some experts say the formation of a civilian fighting group in Nigeria marks a government surrender of power.

Shehu Sani heads the Civil Rights Congress of Nigeria. He says the military is failing in its responsibility to these untrained and unarmed young people. And Mr. Sani says members of the Civilian JTF violate human rights. He accuses them of attacking and arresting people suspected of belonging to the Boko Haram group.

The human rights activist says, "These people will someday grow to be another monster that the Nigerian state has to deal with."


Does Law School Take Too Long and Cost Too Much?

Medical doctors and lawyers have usually held a respected place in American society. But the educational costs necessary to join the professions can be way too high for many young people. Faith Lapidus joins us now with information that may save students both time and money.

People who want to become lawyers traditionally attend three years of law school. Like medical students, many law students are deeply in debt by the time they finish their juris doctor, or JD, degree. Those who take out loans borrow an average of around $125,000 to attend a private school. The average for public law schools is about $75,000.

Almost all graduates must pass a bar examination to get a license to practice law. This is a professional test administered by states. 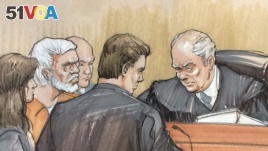 New York University Law School Professor Samuel Erstreicher has written a paper about bar exam requirements. It appeared in the school's Journal of Legislation and Public Policy. Professor Erstreicher suggests that more students should be allowed to take the bar exam after two years of law school. He notes that this was more common in the past. Supreme Court Justice Benjamin Cardozo and President Franklin Roosevelt both took the bar exam after two years.

Professor Erstreicher also suggests a more professional, instead of a more academic, program of study. Learning more about professional skills, he says, would better prepare a lawyer to serve the needs of average Americans.

Some schools offer a two-year program in addition to three-year traditional courses of study. Southwestern Law School in Los Angeles established a program called SCALE in 1974. It says this is the oldest two-year JD program in the country.

Northwestern University School of Law in Chicago became the country's first top law school to add an accelerated program. That was in 2009. Northwestern has the same requirements for accelerated students as for three-year students. They must learn the same material and pay the same price as students in the traditional program. Why, then, would someone want to do that? We asked Northwestern's law school dean, Daniel Rodriguez.

Some lawyers argue against two-year programs. They question whether many law firms would want to hire lawyers without that third year of law school. I'm Faith Lapidus.

And I'm Jim Tedder in Washington. Thank you for spending some time with us on this Thursday, the 19th of September. More Learning English programs are straight ahead, and there is world news at the beginning of the hour.
Related Articles
go top