Update Required To play the media you will need to either update your browser to a recent version or update your Flash plugin.
By VOA
15 January, 2014

Public universities in Nigeria have reopened after a nearly six-month long strike by teachers.

In the city of Bauchi, teachers are now back in classrooms at the Abubakar Tafawa Balewa University. History lecturer Maimuna Sadiq attempts to begin where she stopped teaching in June. 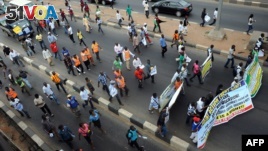 FILE - Students and workers carry placards as they march on the Lagos-Ikorodu highway to protest against the suspension of academic activities following a nation-wide strike embarked by lecturers in state-owned universities in Lagos.

"We had treated three topics. You can't remember? So you mean you were not reading?" said Balewa.

Students at public universities across Nigeria tell VOA they feel both happy and worry to be back.

"I am excited, apprehensive. You know, exams is next month. My project work is not completed. I have a lot to do," one student stated.

"We have to rush the semester to end it early, in order to make up the time that we spent on the strike," another student added.

Teachers tell VOA it is the students who lose because of the strike. Repeated strikes can add months, even years, to the time it takes to finish a study program.

A labor group, the Academic Staff Union of Universities suspended the strike in December. Part of the deal that ended the strike was a government promise to invest billions of dollars each year in university buildings and equipment. The money is to be spent during the next five years.

The government said that soon 25 percent of the nation's budget will be spent on education. The teachers and the government also agree to change it in working conditions and special allowances for those in administrative positions.

But some teachers say, the strike was really about pushing the government to make Nigeria's universities better.

Laz Emetike is with Delta State University. "It's for the benefit of all, not a benefit of lecturers only."

He says improvements in the universities, such as better science laboratories, what let Nigeria compete with other parts of the world.

Countries throughout Africa, not just Nigeria, are considering how to answer the exploding demand for admission to universities. These countries must also improve academic values and requirements and find ways to pay teachers enough to keep them.

Experts tell VOA that Nigeria can not ignore this. Hundreds of thousands of young students pass college entrance exams each year but many can not attend public universities because there are not enough classrooms or teachers. Nigeria's population is expected to increase by 100 percent by the middle of this century.

University lecturers say they will be watching to make sure their schools get and effectively use the money the government has promised.

But for now, Nigerian Universities are filled with students and that is a good thing.