Update Required To play the media you will need to either update your browser to a recent version or update your Flash plugin.
By VOA
20 January 2020

The transition from childhood to the teenage years can be a difficult time. Hormones in the body can affect a young person's emotions and moods. 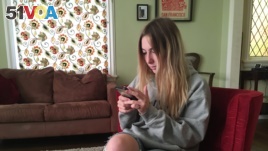 In this November 2018 photo, Laurel Foster participates in a Stanford University research study on using smartphones to help detect depression.

As children grow they usually want to pull away from parents and develop their own personality. So, they may talk or act differently as a teenager.

For example, a 15-year-old who used to have a friendly personality can turn irritable. A 16-year-old who once enjoyed spending time with her family may choose to stay in her room alone.

While these changes in behavior and personality can be difficult, they are for the most part a normal part of the teenage years.

But when is it not normal? When is a change in personality a sign of depression or other mental health issues?

Many parents may not know the difference. A recent poll shows that many Americans do not recognize signs of depression in their preteen and teenage children.

The C.S. Mott Children's Hospital National Poll on Children's Health involved 819 adults in the United States. These men and women had at least one child in middle school, junior high or high school.

Researchers asked these parents about their roles and the roles of schools in recognizing youth depression.

The Mott Poll is a project of the Susan B. Meister Child Health Evaluation and Research Center at the University of Michigan.

In a story on the poll, the Reuters news agency reports that a majority of parents were sure "they would recognize depression in their preteen or teenager." However, two-thirds of parents admitted they had issues identifying "signs and symptoms of this mental health disorder."

Sarah Clark is a co-director of the study. She notes these transitions can make it "challenging to understand a child's emotional state" and "whether there is possible depression."

Clark adds that "in many families, the preteen and teen years" bring major changes. These changes happen both in youth behavior and the ways in which parents and children interact.

Some questions in the survey asked the parents about suicide.

In the United States, youth suicide rates continue to rise. Among people ages 10 to 24 years old, the suicide rate increased 56% between 2007 and 2017. These numbers come from the U.S. Centers for Disease Control and Prevention (CDC).

What can you do to help?

If you think a young person is depressed and is thinking of suicide, what can you do? The CDC offers the following suggestions:

If you are worried about someone, ask them directly, "Are you thinking about suicide?" However, mental health experts warn that you should not promise to keep their thoughts of suicide a secret.

After you ask this question, make sure to listen carefully to the young person. Stay with them and listen to what they need.

Follow up on the person's condition. Continue to check on them to see how they are doing. If you do not live with them, you could physically visit them often as well as call them. Let them know you are there for them and they are not alone.

Take away anything that the person could use to cause self-harm. This could include anything from medications to weapons. Health experts at the Harvard T.H. Chan School of Public Health note that this is an important way to prevent suicide.

People who are suicidal need professional help. But they are often unable or unwilling to find it themselves. So, find a mental health expert or organization that can help them. Many have telephone hotlines for people seeking help.

And that is the Health & Lifestyle report.

mood – n. an emotional state of mind or feeling

peer – n. someone of equal standing

check – v. to ask around; to inspect or examine

hotline – n. a direct telephone line for getting help in an emergency; a telephone service available to the public for some specific purpose