Update Required To play the media you will need to either update your browser to a recent version or update your Flash plugin.
By Caty Weaver
01 November, 2014


North Korea experts say the country has made progress in missile launch systems. They say its launch systems could send a nuclear bomb as far as the United States.

The U.S. military says it is concerned about North Korea's development of small nuclear devices and missile launchers.

A few days later, the South Korean Defense Minister said the North's ability to reduce the size of a nuclear weapon appears to have reached what he called "a significant level." He also said he believes North Korea is able to build a uranium-based nuclear bomb.

Bruce Bechtol is with Angelo State University in Texas. He also served as president of the International Council on Korean Studies. He told VOA that North Korea observers have thought for years that the country possesses that technology. 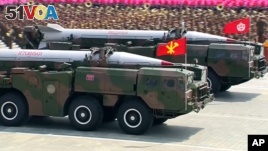 "North Korea has a highly enriched uranium program. They probably had it weaponized by 2010. Which means they probably had a device small enough to put on a missile — probably the Nodong — four years ago."

The Nodong or Rodong 1 is a North Korean ballistic missile. After the missile is launched from North Korea, it could fly as far as Japan.

Mr. Bechtol said he is even more concerned about the plans for North Korea's KN-08 missile, which can travel even greater distances. He said such a missile could hit the United States.

Groups that support stronger measures against North Korea say the U.S. military should take preventive action. One of their ideas is to bomb North Korean missile sites.

But North Korea expert Sergey Radchenko disagrees. Mr. Radchenko is with Britain's Aberystwyth University. He says a strike against North Korea would risk pushing the region into war.

"The hawks, who call for tougher measures, will be counteracted by people who will say we can't really do it. We cannot afford to do anything because of deep uncertainty with regard to the North Korean nuclear program and even with the fact that they have conventional capabilities."

Even opponents of military action against North Korea say the development of smaller weaponry and launchers is a growing threat. But they expect the United States will continue to deal with North Korean threats with restrictions, the promise of aid and a strong military presence in South Korea.

*This report was based on a story from VOA's Brian Padden in Seoul and VOANews.com. Caty Weaver wrote the story for VOA Learning English. Kelly Jean Kelly was the editor.

satellite – n. a machine that is sent into space and that moves around the Earth, moon, sun, or a planet

site – n. the place where something (such as a building) is, was, or will be located