Update Required To play the media you will need to either update your browser to a recent version or update your Flash plugin.
By Kelly Jean Kelly
02 February, 2018


North Korea is sending a 230-member all-female cheerleading squad to the Olympics in South Korea.

Some observers are using the term "army of beauties" to describe the group.

North Koreans who fled the country have mixed feelings about the cheerleaders. These defectors say the women will promote an image of the North that is not real. But they also say they hope the group can help expand ties between North and South Koreans.

The cheerleaders are good-looking and relatively tall women, over 160 centimeters. They were chosen from North Korea's top universities and do not have any family members who live outside the country.

Before they go to South Korea, the cheerleaders are trained to remain loyal to the North Korean government and its leadership. But the training does not always work.

Han Seo-hee was once a cheerleader. "Leaving North Korea and visiting overseas is like going to fight in the heart of the enemy," said Han. She visited South Korea for the 2002 Asian Games and later refused to return home. 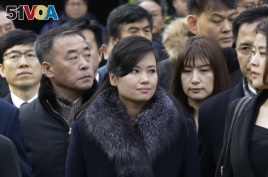 Defectors from North Korea are skeptical about its move to suspend missile and nuclear testing. They see the suspension and the "army of beauties" as part of a plan by the North to improve its international standing and reduce support for United Nations restrictions.

Skeptics say the cheerleaders can show a misleading image of North Korea as a peaceful and happy place. However, the majority of North Koreans live in poverty, and the country's leadership has been accused of crimes against humanity.

At the same time, North Korea watchers say connecting North and South Koreans at the Olympics can be a positive, helpful development. Giving people a chance to meet face-to-face can break down political stereotypes.

"I am expecting that we will be able to feel the warmth of peace in that area, regardless of politics," said Kim Ga-young, who left North Korea in 2012.

North Korean visitors will also be able to see for themselves the freedom and wealth of South Korea, which has a democratic government. The reality will likely be different than the image they expect. North Korean state media often shows South Korea as oppressive and poor.

Brian Padden reported this for VOANews. Kelly Jean Kelly adapted his report for Learning English. George Grow was the editor.

promote – v. to make (something) more popular or well-known

skeptical – adj. having or expressing doubt about something