US Markets Claw Back Gains, But 'Chop' Ahead

Update Required To play the media you will need to either update your browser to a recent version or update your Flash plugin.
By Jim Dresbach
22 February, 2016


New York Stock Exchange traders are wondering which way a volatile financial market will move in the upcoming months.

By the close of trading last week, the Standard and Poor's 500 was down more than 6 percent this year. But the S&P 500 Index rose 2.8 percent on Friday to rebound from a New Year's slump. 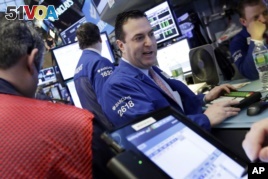 Specialist James Sciulli, center, works with traders at his post on the floor of the New York Stock Exchange, Feb. 22, 2016. Stocks are jumping Monday as the price of oil surges, lifting energy stocks.

Wall Street traders and analysts are looking at factors that would keep the market in the positive. But for now, Wall Street watchers expect extreme ups and downs.

The term "choppy trade" is used often now on Wall Street. A choppy market occurs when prices swing up and down with no major price movement in either direction.

This week is an important one for the market. Financial reports on consumer spending should be released by Target, Macy's, Home Depot and Lowe's. The Consumer Confidence report is set to be released Tuesday.

Consumer spending is a key factor to watch as the fourth-quarter earnings season comes to a close, said market analyst Lindsey Bell.

Another sector traders will contend with this week includes a gross national product report Friday.

This report was based on a report from VOANews. Jim Dresbach adapted this story for Learning English. Additional information came from Reuters and CNN. Kathleen Struck was the editor.

volatile – adj. likely to change in a very sudden or extreme way

rebound – v. an increase or improvement after a decrease or decline

slump – n. a sudden decrease in prices or value

Dow Jones Average – n. the daily average of the stock prices for a group of large American companies

gross national product – n. the total value of the goods and services produced by the people of a nation during a year