Relations between the United States and France appeared to grow stronger this week after President Francois Hollande visited Washington. President Barack Obama welcomed the French leader by taking him on Monday to Charlottesville, Virginia. They visited Monticello, the 18th century house designed and built by Thomas Jefferson, America's third president. Jefferson was also one of the writers of the Declaration of Independence and served as America's representative to France from 1785 to 1789. 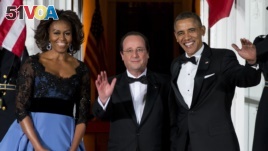 First lady Michelle Obama, left, and President Barack Obama welcome French President François Hollande for a State Dinner at the North Portico of the White House on Tuesday, Feb. 11, 2014.
President Obama told President Hollande that Monticello is an example of what he called the "incredible history" between the United States and France. Thomas Jefferson loved France, and was a supporter of the French Revolution. As Mr. Obama noted, France supported Britain's North American colonies as they fought for independence.

"All this is signified here at Monticello and our hope in starting our visit in this way is that just as we can extend back through generations to see the links between the United States and France, tomorrow we will have an opportunity to talk about not only our current bonds and alliance, but also ways we can strengthen our cooperation in the future."

President Hollande also spoke to reporters during his visit to Monticello. He noted how a Frenchman, the Marquis de Lafayette, assisted the colonial forces during the American Revolution.

President Hollande spent the second day of his state visit in Washington. He received the traditional ceremonial welcome to the White House before opening talks with President Obama.

Two newspapers, Le Monde and The Washington Post, published an opinion piece written by the two men. They wrote about a modern relationship marked by expansion. They said it includes more cooperation in NATO, agreement to remove chemical weapons from Syria and to prevent al-Qaida from gaining more influence in Africa.

Tuesday night, the French president was honored at a state dinner. More than 300 people were invited to the White House. The dinner guests included top US officials, business leaders and movie stars.

The White House was forced to reprint invitations to the state dinner after Mr. Hollande announced a break-up with his former partner last month.

After the dinner, the French leader flew to California, which is considered the center of American information technology. There he met with leaders of several IT companies, including Facebook and Google. At a gathering in San Francisco, Mr. Hollande noted, "It is here in California that the world of tomorrow is being invented." He added that "For centuries, France has wanted to change the world. Together, we can."

The French president has invited President Obama to France in June for ceremonies marking the 70th anniversary of the D-Day invasion in Normandy. That was when Western Allied forces began an effort to free mainland Europe from occupation by Nazi Germany and its allies. France will also lead a climate conference next year. Both leaders say they are repeating their promise to lead the world in dealing with climate change.