Update Required To play the media you will need to either update your browser to a recent version or update your Flash plugin.
By Alice Bryant
03 January, 2018


More than 230 Peruvian writers have signed a letter rejecting the pardon of former President Alberto Fujimori.

Kuczynski said he extended the pardon for humanitarian reasons linked to Fujimori's poor health. The former leader had been serving a 25-year prison sentence for human rights abuses and other charges. 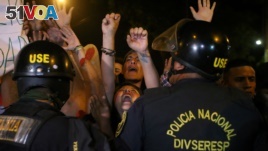 The letter says Fujimori was responsible for a government overthrow and destruction of the country's institutions. It says the pardon "demonstrates a lack of appreciation for dignity, for equality before the law, and the right to remember wrongdoing."

It also describes the pardon as a dangerous agreement between political forces hoping to control corruption cases that involve them.

In addition, Vargas Llosa wrote a commentary in El Pais, the most widely read newspaper in Spain. He said the people who voted for Kuczynski had unknowingly helped return power to Fujimori. He added that the pardon makes Kuczynski a partner and hostage of Fujimori.

The former president was found guilty of human rights violations, corruption, and approving of death squads during his time in office from 1990 to 2000.

Some Peruvians honor Fujimori for fighting rebels. Others say he was a corrupt dictator.

The pardon has led to protests in Lima, the Peruvian capital. Opponents of Fujimori were waving pictures of people imprisoned or killed during his rule.

In a Facebook video filmed from his hospital bed, Fujimori said, "I am aware that the results of my government were well received on one side, but I admit that I have let down other compatriots, and I ask them to forgive me with all my heart."

Fujimori thanked Kuczynski for the pardon and said that, as a free man, he would support the president's calls for greater unity in the country.

Fujimori was taken to the hospital December 23 after suffering a severe drop in blood pressure and an abnormal heartbeat.

Some say Fujimori was acting sick in order to get a pardon. His doctor denies the accusations.

Melissa Melton wrote this story for VOA News. Alice Bryant adapted it for Learning English. Caty Weaver was the editor.

appreciation – n. a feeling of being grateful for something

aware – adj. knowing that something exists

compatriot – n. a person from the same country as someone else