Poverty Is More Than Just Lack of Money

Update Required To play the media you will need to either update your browser to a recent version or update your Flash plugin.
By VOA
22 June, 2014

Poverty is not just about money. Oxford University in Britain says poverty also means not having enough food, education, healthcare and shelter.

Earlier this month, Oxford University released its latest measure of poverty. It is called the Multidimensional Poverty Index, or MPI. Researchers gathered information from 108 countries, where 78 percent of the world's population lives. Oxford says about 1.6 billion of those people are what it calls "multi-dimensionally poor." It says most live in rural areas.

Sabina Alkire is the head of the Oxford Poverty and Human Development Initiative. She describes multidimensional poverty. 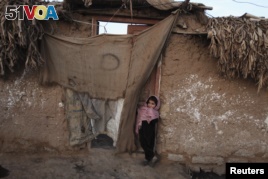 A girl stands near her family house near Islamabad, Pakistan.
"I mean a person who has different things going wrong at the same time. They might not have many assets and they might have malnutrition. And they might not have more than five years of schooling. So, several things are going wrong in their life at the same time. That's what it means to be multi-dimensionally poor. It's not just one."

The MPI found that in nearly 50 developing countries, half of the poor people should be called "destitute" -- in other words, having an extreme lack of basic living standards.

About 420 million people are considered destitute. Most of them live in South Asia. About 343 million live in India. The MPI found there are 200 million destitute people in 24 African countries. Niger has the highest percentage of its population listed as destitute -- almost 69 percent.

An individual's earnings is the most common measure of poverty. But Dr. Alkire says more information is needed to tell the whole story.

"It needs a measure that looks at the other aspects of people's life -- like bad health, bad education, no water and sanitation, or poor housing -- and sees how they're doing in those. Because actually it's not the same people who are poor in both. And so both measures together give a more-balanced picture of how people are living."

She says that in some places, many people have a poor diet, but are not considered poor.

"For example, in Bhutan, according to their national poverty measure, 12 percent of people are income poor and 12.7 are multi-dimensionally poor, but only a quarter of those -- 3.2 percent -- are poor in both."

But she believes that policies aimed at reducing poverty are working.

"We studied changes over time for 34 countries this year, housing 2.5 billion people. And 30 of those countries had significant reductions of poverty. And the really good news we find is that it's low-income countries and least-developed countries that actually reduced poverty the fastest."
Related Articles
go top